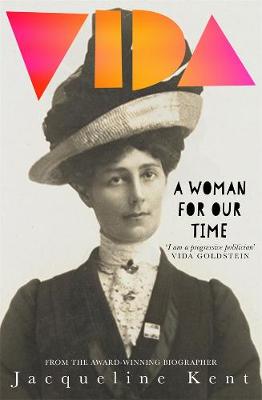 Vida: A woman for our time

Description - Vida: A woman for our time by Jacqueline Kent

Blazing her trail at the dawn of the twentieth century, Vida Goldstein remains Australia's most celebrated crusader for the rights of women. Her life - as a campaigner for the suffrage in Australia, Britain and America, an advocate for peace, a fighter for social equality and a shrewd political commentator - marks her as one of Australia's foremost women of courage and principle.

Vida first came to national prominence as the first woman in the Western world to stand for a national Parliament, in Victoria, for the Senate, in 1903. As a fighter for equal rights for women, and as a champion of social justice, she quickly established a pattern of working quietly against men's control of Australian society. Her work for the peace movement and against conscription during the heightened emotions of the First World War showed her determination to defy governments in the name of fairness and equity.

Vida came to adulthood when Australia was in the process of inventing itself as a new nation, one in which women might have opportunities equal to those of men. Her work for her own sex, especially her battles for equality in politics, illuminated issues that persist to this day.

Book Reviews - Vida: A woman for our time by Jacqueline Kent

» Have you read this book? We'd like to know what you think about it - write a review about Vida: A woman for our time book by Jacqueline Kent and you'll earn 50c in Boomerang Bucks loyalty dollars (you must be a Boomerang Books Account Holder - it's free to sign up and there are great benefits!)

Take Your Best Shot: The Prime Ministership Of Julia Gillard: Penguin Special
No Stock on Hand, Supplier Has No Due Date for Supply.
$8.99 $9.99