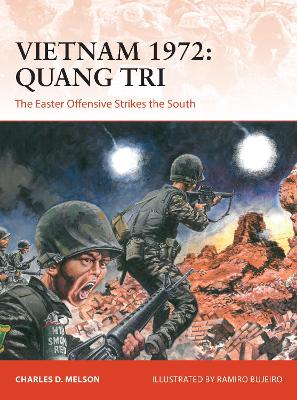 During the Cold War, Vietnam showed the limitations of a major power in peripheral conflicts. Even so, the military forces involved (North Vietnamese, South Vietnamese, American, and Allied) demonstrated battlefield consistency in conflict that gave credit to them all.

By early 1972, Nixon's policy of "Vietnamization" was well underway: South Vietnamese forces had begun to assume greater military responsibility for defense against the North, and US troops were well into their drawdown, with some 25,000 personnel still present in the South. When North Vietnam launched its massive Easter Offensive against the South in late March 1972 (the first invasion effort since the Tet Offensive of 1968), its scale and ferocity caught the US high command off balance. The inexperienced South Vietnamese soldiers manning the area south of Vietnamese Demilitarized Zone in former US bases, plus the US Army and Marines Corps advisors and forces present, had to counter a massive conventional combined-arms invasion.

The North's offensive took place simultaneously across three fronts: Quang Tri, Kontum, and An Loc. In I Corps Tactical Zone, the PAVN tanks and infantry quickly captured Quang Tri City and overran the entire province, as well as northern Thua Thien. However, the ARVN forces regrouped along the My Chanh River, and backed by US airpower tactical strikes and bomber raids, managed to halt the PAVN offensive, before retaking the city in a bloody counteroffensive. Based on primary sources and published accounts of those who played a direct role in the events, this book provides a highly detailed analysis of this key moment in the Vietnam conflict. Although the South's forces managed to withstand their greatest trial thus far, the North gained valuable territory within South Vietnam from which to launch future offensives and improved its bargaining position at the Paris peace negotiations.

» Have you read this book? We'd like to know what you think about it - write a review about Vietnam 1972: Quang Tri: The Easter Offensive Strikes the South book by Charles D. Melson and you'll earn 50c in Boomerang Bucks loyalty dollars (you must be a Boomerang Books Account Holder - it's free to sign up and there are great benefits!)


A Preview for this title is currently not available.
More Books By Charles D. Melson
View All