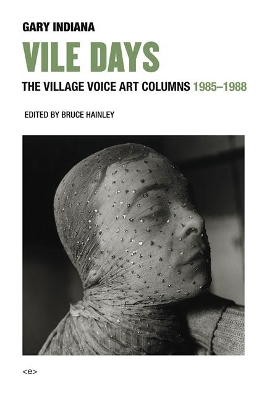 Gary Indiana's collected columns of art criticism from the Village Voice, documenting, from the front lines, the 1980s New York art scene.In 1985, the Village Voice offered me a job as senior art critic. This made my life easier and lousy at the same time. I now had to actually enter all those galleries instead of peeking in the windows. At times, the only tangible perk was having the chump for a fifth of vodka whenever twenty more phonies had flattered my ass off in the course of a working week.
-from Vile DaysFrom March 1985 through June 1988 in The Village Voice, Gary Indiana reimagined the weekly art column. Thirty years later, Vile Days brings together for the first time all of those vivid dispatches, too long stuck in archival limbo, so that the fire of Indiana's observations can burn again. In the midst of Reaganism, the grim toll of AIDS, and the frequent jingoism of postmodern theory, Indiana found a way to be the moment's Baudelaire. He turned the art review into a chronicle of life under siege.As a critic, Indiana combines his novelistic and theatrical gifts with a startling political acumen to assess art and the unruly environments that give it context. No one was better positioned to elucidate the work of key artists at crucial junctures of their early careers, from Sherrie Levine and Richard Prince to Jeff Koons and Cindy Sherman, among others. But Indiana also remained alert to the aesthetic consequence of sumo wrestling, flower shows, public art, corporate galleries, and furniture design. Edited and prefaced by Bruce Hainley, Vile Days provides an opportunity to track Indiana's emergence as one of the most prescient writers of his generation.

» Have you read this book? We'd like to know what you think about it - write a review about Vile Days: The Village Voice Art Columns, 1985-1988 book by Gary Indiana and you'll earn 50c in Boomerang Bucks loyalty dollars (you must be a Boomerang Books Account Holder - it's free to sign up and there are great benefits!)


A Preview for this title is currently not available.
More Books By Gary Indiana
View All