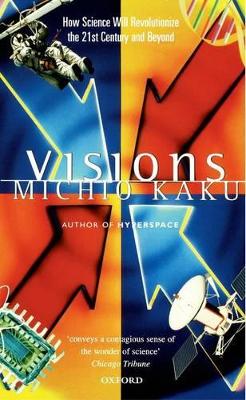 Visions: How Science Will Revolutionize the 21st Century

Description - Visions: How Science Will Revolutionize the 21st Century by Michio Kaku

New in paperback, from the bestselling author of Hyperspace, this spellbinding book brings together the cutting-edge research of today's foremost scientists to explore the science of tomorrow. Michio Kaku describes the development of computers and artificial intelligence, reveals how the decoding of the genetic structure of DNA will allow us to alter and reshape our genetic inheritance, and observes how quantum physicists are perfecting new ways of
harnessing the matter and energy of the Universe. Visions is an exhilarating adventure into the future of our planet and ourselves.

Book Reviews - Visions: How Science Will Revolutionize the 21st Century by Michio Kaku

» Have you read this book? We'd like to know what you think about it - write a review about Visions: How Science Will Revolutionize the 21st Century book by Michio Kaku and you'll earn 50c in Boomerang Bucks loyalty dollars (you must be a Boomerang Books Account Holder - it's free to sign up and there are great benefits!)


A Preview for this title is currently not available.
More Books By Michio Kaku
View All

The Future of Humanity: Terraforming Mars, Interstellar Travel, Immortality, and Our Destiny Beyond
$19.99 $24.99