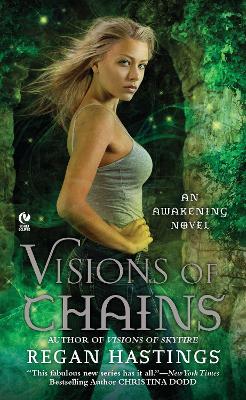 Every witch has a destined mate, an Eternal who will serve as her guardian and complete her powers. Once the first of the coven has awakened, the witches must race against time to join with their Eternals and protect the relics that will prevent the destruction of the world . . . Deidre Sterling is tired of being used. Her mother, the President of the United States, uses her as a prop for the television cameras. And men only pursue her for political connections. Determined to stand for something, Deidre throws herself into causes like the fight for witches' rights, but ends up stepping into the line of fire. Finn has waited eight centuries for his mate - united they will be a powerful weapon. Unfortunately, she wants nothing to do with him. Even after gunfire awakens her powers and a kiss from him engulfs them in flames, she refuses to take the final step. But as the world burns and her duty becomes clear, she realizes that some passions are worth paying the ultimate price . . . Praise for Visions of Magic 'Thrilling action and passionate love scenes.' Fresh Fiction 'A phenomenal read.' Bitten by Paranormal Romance

» Have you read this book? We'd like to know what you think about it - write a review about Visions Of Chains book by Regan Hastings and you'll earn 50c in Boomerang Bucks loyalty dollars (you must be a Boomerang Books Account Holder - it's free to sign up and there are great benefits!)