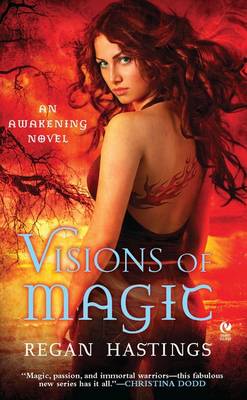 Every witch has a destined mate, an Eternal who will serve as her guardian and complete her powers. Once the first of the coven has awakened, the witches must race against time to join with their Eternals and protect the relics that will prevent the destruction of the world . . . In the ten years since magic has reemerged, witches have become feared and pursued. For weeks Shea Jameson has been haunted by visions of fire. When she unintentionally performs a spell in public, she becomes one of the hunted. Her only hope is Torin, a dangerously sensual man who claims to be her Eternal mate. Torin says that the time of Shea's Awakening has come and that they must find an artefact hidden centuries ago-or else face the end of the world. As her power manifests, and danger and death draw near, Shea must decide whether to trust Torin and the passion and power he begins her-or risk the destruction of everything she's ever known.

» Have you read this book? We'd like to know what you think about it - write a review about Visions Of Magic book by Regan Hastings and you'll earn 50c in Boomerang Bucks loyalty dollars (you must be a Boomerang Books Account Holder - it's free to sign up and there are great benefits!)