Nazi Germany's book burnings, its campaign against ""degenerate art,"" and its persecution of experimental artists pushed the avant-garde to the brink of extinction. How the avant-garde came back, finding a new purpose in the wake of the war, is the subject of ""Visions of Violence"". An extreme faction of aesthetic modernity intent on bulldozing contemporary life, the avant-garde has regularly employed visions of violence in their push for societal and cultural renewal. But in the shadow of unparalleled war and genocide, such aesthetic violence lost its force. This book explores the reconfiguration of the avant-garde in response to the violent transformation of European reality. Citing the emergence of independent avant-garde practitioners in the place of the previous collective, Richard Langston considers six individual exemplars of Germany's post-fascist avant-garde - works that span the last six decades: painter, writer, and filmmaker Peter Weiss' appropriation of French surrealism in the fifties; writer Dieter Wellershoff's coterie of ""new realists""; artist WolfVostell's mediation and conflation of the experiences of the Auschwitz trials and the Vietnam War; poet and novelist Dieter Brinkmann's collages from the seventies; the multimedia displacements of Alexander Kluge; and the performative engagements of dramatists Christoph Schlingensief and Rene Pollesch. Taking stock of the evolution of Germany's post-fascist avant-gardes, Langston's book shows how the movement from Weiss to Pollesch exhibits the problems that both modernity and postmodernity pose for an aesthetic engagement of Germany's violent past.

Other Editions - Visions of Violence by Richard Langston 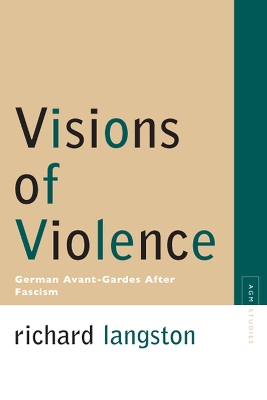 » Have you read this book? We'd like to know what you think about it - write a review about Visions of Violence book by Richard Langston and you'll earn 50c in Boomerang Bucks loyalty dollars (you must be a Boomerang Books Account Holder - it's free to sign up and there are great benefits!)

Richard Langston is assistant professor of Germanic languages and literatures at the University of North Carolina at Chapel Hill.

A Preview for this title is currently not available.
More Books By Richard Langston
View All