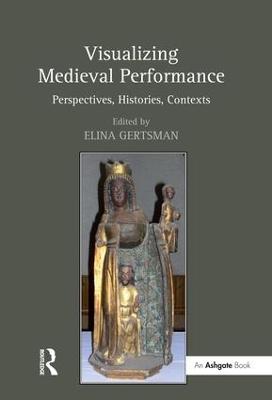 Taking a fresh look at the interconnections between medieval images, texts, theater, and practices of viewing, reading and listening, this explicitly interdisciplinary volume explores various manifestations of performance and meanings of performativity in the Middle Ages. The contributors - from their various perspectives as scholars of art history, religion, history, literary studies, theater studies, music and dance - combine their resources to reassess the complexity of expressions and definitions of medieval performance in a variety of different media. Among the topics considered are interconnections between ritual and theater; dynamics of performative readings of illuminated manuscripts, buildings and sculptures; linguistic performances of identity; performative models of medieval spirituality; social and political spectacles encoded in ceremonies; junctures between spatial configurations of the medieval stage and mnemonic practices used for meditation; performances of late medieval music that raise questions about the issues of historicity, authenticity, and historical correctness in performance; and tensions inherent in the very notion of a medieval dance performance.

» Have you read this book? We'd like to know what you think about it - write a review about Visualizing Medieval Performance book by Elina Gertsman and you'll earn 50c in Boomerang Bucks loyalty dollars (you must be a Boomerang Books Account Holder - it's free to sign up and there are great benefits!)

A Preview for this title is currently not available.
More Books By Elina Gertsman
View All