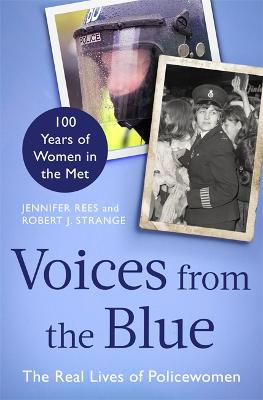 Voices from the Blue: The Real Lives of Policewomen (100 Years of Women in the Met)

Description - Voices from the Blue: The Real Lives of Policewomen (100 Years of Women in the Met) by Jennifer Rees

In February 1919, London's first women police officers took to the streets of the city. They battled entrenched gender stereotypes, institutional inequality, sexual harassment and assaults disturbingly familiar to those affecting today's #MeToo generation of modern women. Female officers, facing resentment from male colleagues, were expected to do little more than 'Make the tea, Luv . . .' and were charged with the sole task of looking after women and children who fell into police hands.Yet, in the course of a century, policewomen have won the equality they demanded, overcome sexism and prejudice, rejected harassment and sexual assaults and smashed through the glass ceiling to lead, rather than follow, their male colleagues. One hundred years on from those first Women Police Constables, women hold some of the most powerful positions in British policing, including the Metropolitan Police Commissioner and the Director of Public Prosecutions. IT'S A FAIR COP, LUV tells the story of the hundred years of service of female police officers within the Metropolitan Police through the voices of the women who fought their way towards equality and won the respect of both their colleagues and the public. The authors have interviewed hundreds of former and serving policewomen and with the co-operation of the Metropolitan Police and the Women's Police Association now have access to the files and stories of thousands of former officers who served over the past hundred years. Those police archives, together with material held by the National Archives and private libraries, provide a detailed and fascinating oral history of the challenges women police officers faced down the years.

Buy Voices from the Blue: The Real Lives of Policewomen (100 Years of Women in the Met) by Jennifer Rees from Australia's Online Independent Bookstore, Boomerang Books.

Book Reviews - Voices from the Blue: The Real Lives of Policewomen (100 Years of Women in the Met) by Jennifer Rees

» Have you read this book? We'd like to know what you think about it - write a review about Voices from the Blue: The Real Lives of Policewomen (100 Years of Women in the Met) book by Jennifer Rees and you'll earn 50c in Boomerang Bucks loyalty dollars (you must be a Boomerang Books Account Holder - it's free to sign up and there are great benefits!)


A Preview for this title is currently not available.
More Books By Jennifer Rees
View All