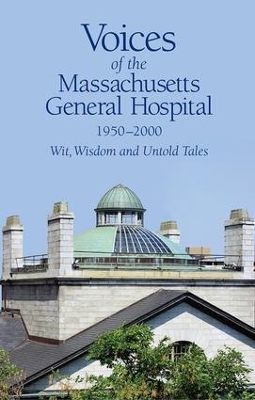 Voices of the Massachusetts General Hospital 1950-2000

Voices of the Massachusetts General Hospital 1950-2000 contains revealing quotations, intimate and previously untold stories of many of the physicians, nurses and other clinicians who dedicated themselves to the pursuit of excellence on behalf of their patients and families, their colleagues and the world beyond the hospital. What started as an email solicitation for stories and anecdotes turned into a moving and instructive portrait of the daily life of a storied institution in the last half of the 20th century.

» Have you read this book? We'd like to know what you think about it - write a review about Voices of the Massachusetts General Hospital 1950-2000 book by Stephen Dretler and you'll earn 50c in Boomerang Bucks loyalty dollars (you must be a Boomerang Books Account Holder - it's free to sign up and there are great benefits!)

Stephen P. Dretler, MD is a pioneering, award-winning urologist with expertise in kidney stone disease. Lloyd Axelrod, MD is an internist and endocrinologist with expertise in diabetes, hypoglycemic disorders and the medical uses of anti-inflammatory steroids. Willard M. Daggett, MD is a cardiac surgeon with a special interest in surgical repair of mechanical complications following a heart attack and preservation of myocardial function during cardiac surgery. Georgia W. Peirce is a special projects manager for Patient Care Services at the Massachusetts General Hospital. She is the co-editor and designer of Massachusetts General Hospital Nursing at Two Hundred.

A Preview for this title is currently not available.
More Books By Stephen Dretler
View All