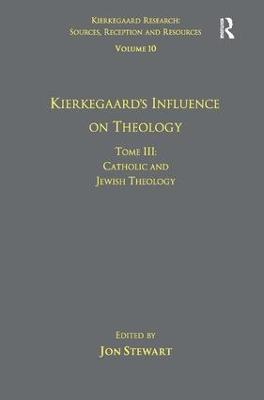 Kierkegaard has always enjoyed a rich reception in the fields of theology and religious studies. This reception might seem obvious given that he is one of the most important Christian writers of the nineteenth century, but Kierkegaard was by no means a straightforward theologian in any traditional sense. He had no enduring interest in some of the main fields of theology such as church history or biblical studies, and he was strikingly silent on many key Christian dogmas. Moreover, he harbored a degree of animosity towards the university theologians and churchmen of his own day. Despite this, he has been a source of inspiration for numerous religious writers from different denominations and traditions. Tome III explores the reception of Kierkegaard's thought in the Catholic and Jewish theological traditions. In the 1920s Kierkegaard's intellectual and spiritual legacy became widely discussed in the Catholic Hochland Circle, whose members included Theodor Haecker, Romano Guardini, Alois Dempf and Peter Wust. Another key figure of the mid-war years was the prolific Jesuit author Erich Przywara. During and especially after World War II Kierkegaard's ideas found an echo in the works of several trend-setting Catholic theologians of the day such as Hans Urs von Balthasar, Henri de Lubac and the popular spiritual author Thomas Merton. The second part of Tome III focuses on the reception of Kierkegaard's thought in the Jewish theological tradition, introducing the reader to authors who significantly shaped Jewish religious thought both in the United States and in Israel. These theologians represent a variety of religious and political backgrounds: the spiritual world of Hasidism, Modern Orthodox Judaism of Mithnaggedic origin, and Modern Religious Zionism.

» Have you read this book? We'd like to know what you think about it - write a review about Volume 10, Tome III: Kierkegaard's Influence on Theology: Catholic and Jewish Theology book by Jon Stewart and you'll earn 50c in Boomerang Bucks loyalty dollars (you must be a Boomerang Books Account Holder - it's free to sign up and there are great benefits!)