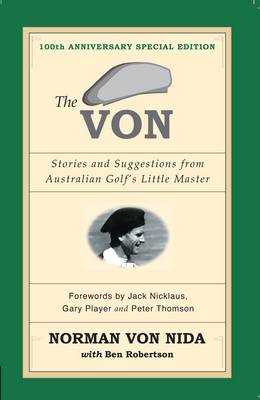 If he were alive this year, Australian golfing legend Norman von Nida would have celebrated his 100th birthday on St Valentine's Day. Sadly, Queensland lost one of its favourite sporting sons several years ago, aged 93, when he died peacefully in his sleep. The Von never did fancy breaking 100. In celebration of his life, this limited special edition has been released to coincide with the unveiling of The Von Bronze statue at Nudgee Golf Club in Brisbane. The Von learnt the game as a caddy at Royal Queensland Golf Club during the Depression years, yet few people know that his career was kick-started at Nudgee using clubs bought for him by the then club champion, Mr Tom Mullins. A chance meeting between the two on a rainy day would change the face of golf in this country forever. While the Von's subsequent achievements as a player were awe-inspiring, with 80-odd professional titles in Australia, Great Britain and Asia, it was his generous spirit and determination to give back to the game he loved that are still revered today. The Von Bronze project, funded by ordinary club golfers and superstars of the game alike, such as Jack Nicklaus, Gary Player, Peter Thomson, Greg Norman, Wayne Grady, Jack Newton and Sir Nick Faldo, will stand in Nudgee's clubhouse. Much like this book it is a lasting tribute to a man whose life reads like the pages of a Hollywood movie script- an abattoir worker from the wrong side of the tracks who would one day take on and beat the world's best golfers while making friends with battlers, kings and billionaires alike. Jack Nicklaus considered The Von his 'unique and remarkable friend'. Gary Player lauds him 'as one of the first great Australian golfers' and Peter Thomson reflects- 'to be with him was an uncommon experience'. Norman von Nida was hale, hearty, 85 years young and still playing golf each week when he recalled a lifetime of friendships and memories that made him 'the wealthiest man on the planet'.

» Have you read this book? We'd like to know what you think about it - write a review about Von: Stories & Suggestions from Australian Golf's Little Master - 100th Anniversary Special Edition book by Norman Von Nida and you'll earn 50c in Boomerang Bucks loyalty dollars (you must be a Boomerang Books Account Holder - it's free to sign up and there are great benefits!) 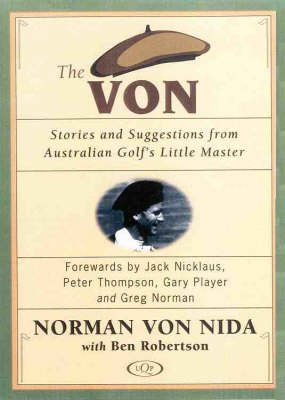