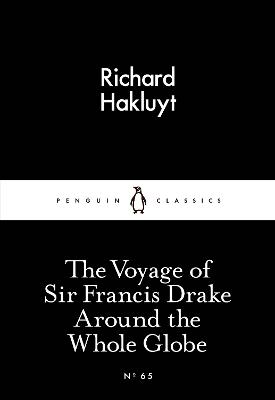 The Voyage of Sir Francis Drake Around the Whole Globe

The great propagandist for Tudor sea power depicts the voyages of the famed explorers who mapped the world.

'Their fruits be diverse and plentiful, as nutmegs, ginger, long pepper, lemons, cucumbers, cocos, sago, with divers other sorts...'Scholar, spy, diplomat and supreme propagandist for Elizabethan sea power, Richard Hakluyt's accounts of famed explorers mythologised a nation growing rapidly aware of the size and strangeness of the world - and determined to dominate it.Introducing Little Black Classics- 80 books for Penguin's 80th birthday. Little Black Classics celebrate the huge range and diversity of Penguin Classics, with books from around the world and across many centuries. They take us from a balloon ride over Victorian London to a garden of blossom in Japan, from Tierra del Fuego to 16th century California and the Russian steppe. Here are stories lyrical and savage; poems epic and intimate; essays satirical and inspirational; and ideas that have shaped the lives of millions.

» Have you read this book? We'd like to know what you think about it - write a review about Voyage of Sir Francis Drake Around the Whole Globe book by Richard Hakluyt and you'll earn 50c in Boomerang Bucks loyalty dollars (you must be a Boomerang Books Account Holder - it's free to sign up and there are great benefits!)


A Preview for this title is currently not available.
More Books By Richard Hakluyt
View All

The Texts and Versions of John de Plano Carpini and William de Rubruquis: As Printed for the First Time by Hakluyt in 1598, Together with Some Shorter Pieces
$99.00 $110.00

The Principal Navigations, Voyages, Traffiques and Discoveries of the English Nation
$81.71 $90.79

The Principal Navigations, Voyages, Traffiques & Discoveries of the English Nation: Made by Sea or Over-Land to the Remote and Farthest Distant Quarters of the Earth at Any Time Within the Compasse of These 1600 Yeeres
$73.70 $81.89