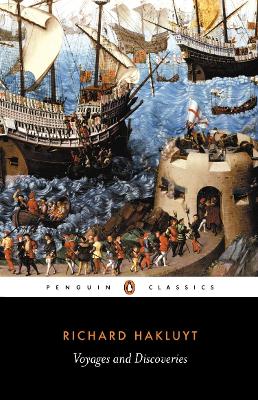 Renaissance diplomat and part-time spy, William Hakluyt was also England's first serious geographer, gathering together a wealth of accounts about the wide-ranging travels and discoveries of the sixteenth-century English. One of the epics of this great period of expansion, The Principal Navigations, Voyages, Traffiques and Discoveries of the English Nation describes, in the words of the explorers themselves, an astonishing era in which the English grew rapidly aware of the sheer size and strangeness of their world. Mingling accounts of the journeys of renowned adventurers such as Drake and Frobisher with descriptions by other explorers and traders to reveal a nation beginning to dominate the seas, Hakluyt's great work was originally intended principally to assist navigation and trade. It also presents one of the first and greatest modern portraits of the globe.

» Have you read this book? We'd like to know what you think about it - write a review about Voyages and Discoveries book by Richard Hakluyt and you'll earn 50c in Boomerang Bucks loyalty dollars (you must be a Boomerang Books Account Holder - it's free to sign up and there are great benefits!)

A Preview for this title is currently not available.
More Books By Richard Hakluyt
View All

The Texts and Versions of John de Plano Carpini and William de Rubruquis: As Printed for the First Time by Hakluyt in 1598, Together with Some Shorter Pieces
$93.01 $103.34

The Principal Navigations, Voyages, Traffiques and Discoveries of the English Nation
$76.76 $85.29

The Principal Navigations, Voyages, Traffiques & Discoveries of the English Nation Made by Sea or Ov
$70.82 $78.69

The Discovery and Conquest of Terra Florida by Don Ferdinando de Soto and Six Hundred Spaniards, His
$54.97 $61.08

The Principal Navigations, Voyages, Traffiques & Discoveries of the English Nation: Made by Sea or Over-Land to the Remote and Farthest Distant Quarters of the Earth at Any Time Within the Compasse of These 1600 Yeeres
$69.23 $76.92