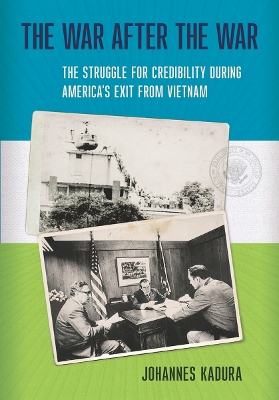 The War after the War

The Struggle for Credibility during America's Exit from Vietnam

Description - The War after the War by Johannes Kadura

In The War after the War, Johannes Kadura offers a fresh interpretation of American strategy in the wake of the cease-fire that began in Vietnam on January 28, 1973. The U.S. exit from Vietnam continues to be important in discussions of present-day U.S. foreign policy, so it is crucial that it be interpreted correctly. In challenging the prevailing version of the history of the events, Kadura provides interesting correctives to the different accounts, including the ones of the key actors themselves, President Richard Nixon and Secretary of State Henry Kissinger foremost among them. In so doing, Kadura aims to forge a synthesis between orthodox and revisionist interpretations of this important period. Kadura finds that the strategy employed by Nixon and Kissinger centered on the concepts of "equilibrium strategy" and "insurance policy." That approach allowed them to follow a twofold strategy of making a major effort to uphold South Vietnam while at the same time maintaining a fallback strategy of downplaying the overall significance of Vietnam.
Whether they won or lost on their primary bet to secure South Vietnam, Nixon and Kissinger expected to come through the crisis in a viable strategic position.

Buy The War after the War by Johannes Kadura from Australia's Online Independent Bookstore, Boomerang Books.

Book Reviews - The War after the War by Johannes Kadura

» Have you read this book? We'd like to know what you think about it - write a review about War after the War book by Johannes Kadura and you'll earn 50c in Boomerang Bucks loyalty dollars (you must be a Boomerang Books Account Holder - it's free to sign up and there are great benefits!)

Johannes Kadura is founding partner and managing director of Think Asia Group. He is also an Associate Fellow at the German Council on Foreign Relations and an Adjunct Professor at Peking University.