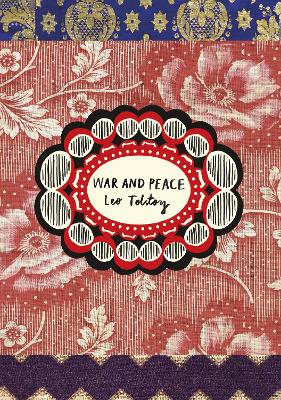 'If you've never read it, now is the moment. This translation will show that you don't read War and Peace, you live it' The Times

Tolstoy's enthralling epic depicts Russia's war with Napoleon and its effects on the lives of those caught up in the conflict. He creates some of the most vital and involving characters in literature as he follows the rise and fall of families in St Petersburg and Moscow who are linked by their personal and political relationships. His heroes are the thoughtful yet impulsive Pierre Bezukhov, his ambitious friend, Prince Andrei, and the woman who becomes indispensable to both of them, the enchanting Natasha Rostov.

'It is simply the greatest novel ever written. All human life is in it. If I were told there was time to read only a single book, this would be it' Andrew Marr

The Vintage Classics Russians Series - sumptuous editions of the greatest books to come out of Russia during the most tumultuous period in its history.

» Have you read this book? We'd like to know what you think about it - write a review about War and Peace (Vintage Classic Russians Series) book by Leo Tolstoy and you'll earn 50c in Boomerang Bucks loyalty dollars (you must be a Boomerang Books Account Holder - it's free to sign up and there are great benefits!)

Leo Tolstoy was born in central Russia on 9 September 1828. In 1852 he published his first work, the autobiographical Childhood. He served in the army during the Crimean War and his Sevastopol Sketches (1855-6) are based on his experiences. His two most popular masterpieces are War and Peace (1864-69) and Anna Karenina (1875-8). He died in 1910. Together, Richard Pevear and Larissa Volokhonsky have translated works by Tolstoy, Chekhov, Gogol, Bulgakov and Pasternak. They were twice awarded the PEN/Book-of-the-Month Club Translation Prize (for their translations of Dostoevsky's Brothers Karamazov and Tolstoy's Anna Karenina) and their translation of Dostoevsky's Demons was one of three nominees for the same prize. They are married and live in France.

The Eighth Life: (For Brilka) The International Bestseller
Nino Haratischvili
$22.67 $26.99