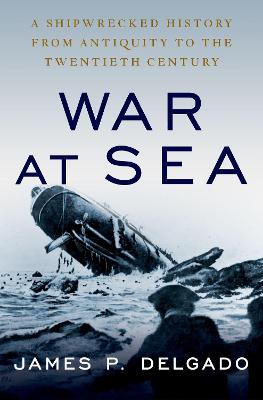 War at Sea: A Shipwrecked History from Antiquity to the Twentieth Century

Description - War at Sea: A Shipwrecked History from Antiquity to the Twentieth Century by James P. Delgado

The ocean is humanity's largest battlefield. Resting in its depths lie the lost ships of war, spanning the totality of human history. Many wrecks are nameless, others from more recent times are remembered, honored even, as are the battles that claimed them, like Actium, Trafalgar, Tsushima, Jutland, Pearl Harbor, and Midway. Underwater exploration is increasingly discovering long-lost warships from the deepest parts of the ocean, revealing a vast undersea museum
that speaks to battles won and lost, service, sacrifice, and the human costs of warfare. War at Sea is a dramatic global tour of this remote museum and other formerly lost traces of
humanity's naval heritage. It is also an account by the world's leading naval archaeologist of how underwater exploration has discovered these remains, thus resolving mysteries, adding to our understanding of the past, and providing intimate details of the experience of naval warfare. Arranged chronologically, the book begins with the warships and battles of the ancient Egyptians, Phoenicians, Greeks, Romans, and Chinese, and then progresses through three thousand years to the lost ships of the
Cold War.James Delgado, who has personally explored, dived, and studied a number of the wrecks and sites in the book, provides insights as an explorer, archaeologist, and
storyteller. The result is a unique and compelling history of naval warfare. From fallen triremes and galleons to dreadnoughts, aircraft carriers, and nuclear submarines, this book vividly brings thousands of years of naval warfare to life.

Book Reviews - War at Sea: A Shipwrecked History from Antiquity to the Twentieth Century by James P. Delgado

» Have you read this book? We'd like to know what you think about it - write a review about War at Sea: A Shipwrecked History from Antiquity to the Twentieth Century book by James P. Delgado and you'll earn 50c in Boomerang Bucks loyalty dollars (you must be a Boomerang Books Account Holder - it's free to sign up and there are great benefits!)


A Preview for this title is currently not available.
More Books By James P. Delgado
View All