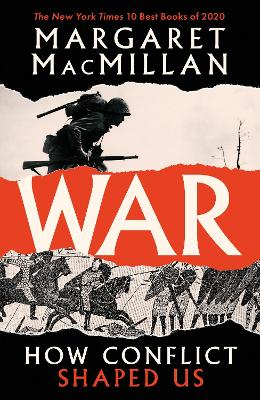 War: How Conflict Shaped Us

Description - War: How Conflict Shaped Us by Professor Margaret MacMillan

The time since the Second World War has been seen by some as the longest uninterrupted period of harmony in human history: the 'long peace', as Stephen Pinker called it. But despite this, there has been a military conflict ongoing every year since 1945. The same can be said for every century of recorded history. Is war, therefore, an essential part of being human?

In War, Professor Margaret MacMillan explores the deep links between society and war and the questions they raise. We learn when war began - whether among early homo sapiens or later, as we began to organise ourselves into tribes and settle in communities. We see the ways in which war reflects changing societies and how war has brought change - for better and worse.

Economies, science, technology, medicine, culture: all are instrumental in war and have been shaped by it - without conflict it we might not have had penicillin, female emancipation, radar or rockets. Throughout history, writers, artists, film-makers, playwrights, and composers have been inspired by war - whether to condemn, exalt or simply puzzle about it. If we are never to be rid of war, how should we think about it and what does that mean for peace?

Other Editions - War: How Conflict Shaped Us by Professor Margaret MacMillan » Have you read this book? We'd like to know what you think about it - write a review about War: How Conflict Shaped Us book by Professor Margaret MacMillan and you'll earn 50c in Boomerang Bucks loyalty dollars (you must be a Boomerang Books Account Holder - it's free to sign up and there are great benefits!)


A Preview for this title is currently not available.
More Books By Professor Margaret MacMillan
View All