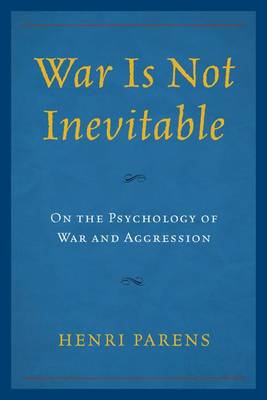 War Is Not Inevitable

On the Psychology of War and Aggression

Description - War Is Not Inevitable by Henri Parens

In 1932 Einstein asked Freud, 'Is there any way of delivering mankind from the menace of war?' Freud answered that war is inevitable because humans have an instinct to self-destroy, a death instinct which we must externalize to survive. But nearly four decades of study of aggression reveal that rather than being an inborn drive, destructiveness is generated in us by experiences of excessive psychic pain. In War is Not Inevitable: On the Psychology of War and Aggression, Henri Parens argues that the death-instinct based model of aggression can neither be proved nor disproved as Freud's answer is untestable. By contrast, the 'multi-trends theory of aggression' is provable and has greater heuristic value than does a death-instinct based model of aggression.

When we look for causes for war we turn to history as well as national, ethnic, territorial, and or political issues, among many others, but we also tend to ignore the psychological factors that play a large role. Parens discusses such psychological factors that seem to lead large groups into conflict. Central among these are the psychodynamics of large-group narcissism. Interactional conditions stand out: hyper-narcissistic large-groups have, in history, caused much narcissistic injury to those they believe they are superior to. But this is commonly followed by the narcissistically injured group's experiencing high level hostile destructiveness toward their injury-perpetrator which, in time, will compel them to revenge. Among groups that have been engaged in serial conflicts, wars have followed from this psychodynamic narcissism-based cyclicity.

Parens details some of the psychodynamics that led from World War I to World War II and their respective aftermath, and he addresses how major factors that gave rise to these wars must, can, and have been counteracted. In doing so, Parens considers strategies by which civilization has and is constructively preventing wars, as well as the need for further innovative efforts to achieve that end.

Other Editions - War Is Not Inevitable by Henri Parens 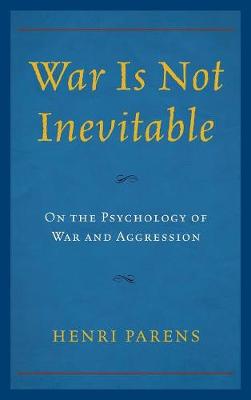 Book Reviews - War Is Not Inevitable by Henri Parens

» Have you read this book? We'd like to know what you think about it - write a review about War Is Not Inevitable book by Henri Parens and you'll earn 50c in Boomerang Bucks loyalty dollars (you must be a Boomerang Books Account Holder - it's free to sign up and there are great benefits!)

Henri Parens, FACPsa, is professor of psychiatry at Jefferson Medical College as well as training and supervising analyst at the Psychoanalytic Center of Philadelphia.

A Preview for this title is currently not available.
More Books By Henri Parens
View All