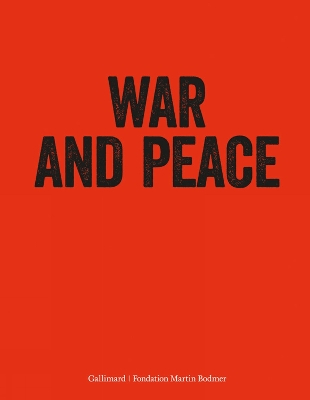 Mankind has never ceased to think about, justify, prepare for, conduct and glorify war. Alongside this, there has always been a parallel endeavour to limit war's worst abuses, condemn it for its ravages, and imagine and work towards building a more just and peaceful world. The Martin Bodmer Foundation, a Swiss institution in UNESCO's 'Memory of the World' register, in partnership with the Red Cross and the United Nations Organization, is staging a show devoted to the contemporary realities of war and peace. The exhibition invites the public to reflect on how we think about war, and how peace can be built. Under the direction of Pierre Hazan - a former war reporter and diplomatic correspondent, now an advisor in the mediation of armed conflicts - the exhibition and its catalogue are structured in three parts: the rise of conflict, war and the law, and the construction of peace. War & Peace brings together insights from literature, fine arts, anthropology, philosophy, psychoanalysis, law, and politics. Literary works, propaganda posters, photography, paintings, engravings, and archival documents illuminate the dialogue between humankind's warlike nature and the desire for peace. AUTHORS: Pierre Hazan is a former war reporter and diplomatic correspondent, now an advisor in the mediation of armed conflicts. Jacques Berchtold is the Director of the Bodmer Foundation. With contributions from: Antonio Guterres, Peter Maurer, Gilad Ben Nun, Andre Hurst, Jean-Paul Marthoz, Jean-Charles Giroud, David Sander, Pierre-Francois Souyri, Nicolas Ducimetiere, Jean Kaempfer, Lindsay Cameron, Georges Nivat, Daniel Palmieri, Solange Ghernaouti, Pierre-Etienne Bourneuf, Stefan Vukotic, Colin Wells, Constance Sereni, Antoine Garapon, Blandine Bluckacz-Louisfert, Pierre-Etienne Bourneuf, Mark Freeman, Leila Kilani. SELLING POINTS: . Published on the occasion of the 100th anniversary of the creation of the League of Nations in 1919 . With a preface by Antonio Guterres, Secretary General of the United Nations . Accompanies an exhibition at the Fondation Martin Bodmer, Geneva, in partnership with the United Nations Organization in Geneva and the Red Cross, from 5 October, 2019, to 16 February, 2020 250 colour images

» Have you read this book? We'd like to know what you think about it - write a review about War & Peace book by Pierre Hazan and you'll earn 50c in Boomerang Bucks loyalty dollars (you must be a Boomerang Books Account Holder - it's free to sign up and there are great benefits!)


A Preview for this title is currently not available.
More Books By Pierre Hazan
View All