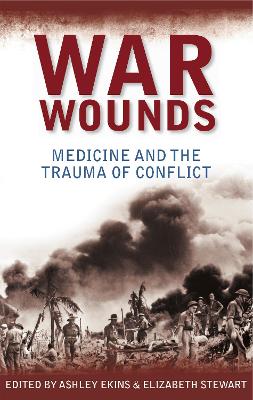 Medicine and the Trauma of Conflict

The history of warfare and the history of medicine are closely intertwined. War has been an accelerator of advances in medical treatment and surgery. As modern weaponry became more destructive, medicine developed techniques and procedures to deal with the volume and nature of battlefield casualties. Preventative medicine has also increased the effectiveness of fighting forces through improvements in soldiers' health and disease resistance.
This book is a collection of chapters by historians, medical practitioners and researchers, former and serving military medical officers, surgeons, nurses and veterans, who explore the impact of war, wounds and trauma through the historical record, reported narratives and personal experiences.
The book includes major sections on World War One (including chapters on shell shock and plastic surgery), World War Two (including a chapter on the Nazi death camps), the Vietnam War (including chapters on Agent Orange and sexually transmitted diseases), together with chapters on the Korean War and the current conflict in Afghanistan. In addition, the book includes several personal stories in which veterans describe their experiences of injury and recovery.
War Wounds is a truly unique book, which offers considerable insights into an aspect of war that is often mentioned but seldom examined as it is here. Medical professionals, military personnel and the general public will all find it a remarkably revealing read. 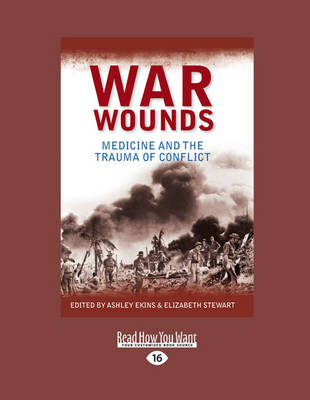 » Have you read this book? We'd like to know what you think about it - write a review about War Wounds book by Ashley Ekins and you'll earn 50c in Boomerang Bucks loyalty dollars (you must be a Boomerang Books Account Holder - it's free to sign up and there are great benefits!)

Jay Winter is Charles J. Stille Professor of History at Yale University. He is an internationally renowned scholar of the First World War and its impact on the 20th century Ashley Ekins is Head of the Military History Section at the Australian War Memorial in Canberra. Kerry Neale is a PhD candidate at the University of New South Wales at the Australian Defence Force Academy, Canberra, Australia. She is currently finalising her thesis, entitled "Without the Faces of Men:" the Experiences of Facially Disfigured Great War Veterans of Britain and the Dominions." Marina Larsson is a Melbourne historian who has held lecturing positions at La Trobe and Monash universities. She is the author of the award-winning book Shattered Anzacs: Living with the Scars of War (2009), a study which explores the impact of war disability on First World War returned soldiers and their families. Paul Weindling is Wellcome Trust Research Professor in the History of Medicine at Oxford Brookes University. He directs a project on victims of Nazi human experiments covering several thousand life histories of victims. He also researches physicians who were refugees from Nazism. Debbie Lackerstein is a lecturer in history in the School of Humanities and Social Sciences, University of New South Wales, Australian Defence Force Academy, Canberra. She is currently engaged in research into different perspectives on the liberation of the German concentration and labour camps at the end of the European war in 1945. Simon Gandevia is a medical graduate and neurophysiologist. He is a founder and Deputy Director of the Prince of Wales Medical Research Institute. He has received three research doctorates (PhD, MD and DSc), all from the University of New South Wales. His research focuses on how the human brain controls movement. David Bradford is a sexual health physician, foundation fellow of the Australasian Chapter of Sexual Health Medicine and was made a Member of the Order of Australia for his services to sexual health medicine. Elizabeth Stewart is a historian in the Military History Section at the Australian War Memorial. Graham Walker graduated from the Royal Military College, Duntroon, into the Royal Australian Infantry. He saw active service attached to the 2/7 DEO Gurkha Rifles in Sabah and Sarawak during Indonesian-Malaysian Confrontation and with the 8th Battalion, Royal Australian Regiment in Vietnam where he was Mentioned in Despatches. Peter Edwards is a consultant historian and writer, who has published on Australian defence and foreign policies for more than thirty years. He has held professorial positions at Deakin University in Melbourne, the Australian Defence Force Academy in Canberra, and currently at Flinders University in Adelaide. Tony White qualified first as a physician and then as a dermatologist. His appointments have included Visiting Medical Officer, Royal Prince Alfred Hospital, Clinical Senior Lecturer (University of Sydney) and Colonel Consultant Dermatologist, Army Office Canberra. He is in private practice in Sydney and has a special interest in remote area dermatology. Sharon Cooper (now Sharon Bown) joined the Royal Australian Air Force as a direct entry Nursing Officer in January 1999. She deployed to East Timor in 2000 and again in 2004, when she was badly injured in a helicopter crash, suffering spinal injuries and facial fractures. Following 12 months of rehabilitation, Sharon returned to unrestricted service. Graham Edwards was wounded twice as a serviceman in Vietnam, the second time losing his legs to a `jumping jack' anti - personnel land mine. He then spent ten years with the Commonwealth Public Service in the Departments of Defence, Veterans' Affairs and in the Vietnam Veterans' Counselling Service. Graham was elected as a Councillor with the City of Stirling in 1980 and in 1983 was elected to the Parliament of Western Australia, where he served for fourteen years including seven years as a Minister. In 1998 Graham was elected to the House of Representatives in Federal Parliament where he served until he retired in 2007.

A Preview for this title is currently not available.
More Books By Ashley Ekins
View All