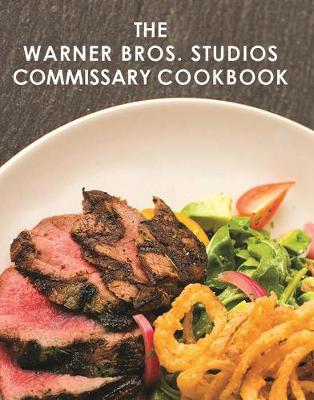 The Warner Bros. Studios commissary dining room and adjacent employee cafeteria were originally operated as part of the First National Pictures Studios, acquired by Warner Bros. Studios in 1928. From that point forward, and still to the present day, our highly skilled cooks work hard to satisfy the discerning tastes of our entire studio family.
The recipes and plate presentations in this cookbook are representative of what has been featured in the commissary, and the chefs have taken care to include those dishes that they believe will be most enjoyed by your family and friends.
Featuring over 57 appetizers, soups, salads, main courses, and dessert dishes as well as dozens of stunning photographs by Anjali Pinto, notes from chefs Gabriel Morales and Maurizio Binotto, archival menu images, historic Warner Bros. Studios commissary photographs, and a brief history of Warner Bros. Studios that goes into fascinating detail on the studio's accomplished legacy.

Raised in Los Angeles, famed chef and hospitality entrepreneur Gabriel Morales is renowned for his progressive cuisine, a style built on classic American favorites and hints of his Latin heritage. Maurizio Binotto is the Director of Food and Beverage Services at Warner Bros. Studios.