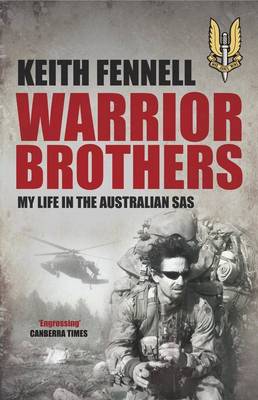 A red-hot memoir from an Australian ex-SAS soldier, full of the action, fear and camaraderie of combat

A red-hot memoir from an Australian ex-SAS soldier, full of the action, fear and camaraderie of combat.

For the first time, an ex-SAS soldier tells all- what it means to be a member of an elite group, the challenges, the highs and the lows - and the sense of duty, honour and brotherhood that never dies.

In 1995, aged just 21, Keith Fennell was accepted into the Australian Special Air Service Regiment, the SAS. Over the next 11 years, operations took him from the jungles of East Timor to the rugged mountains of Afghanistan, from the southern Indian Ocean to Iraq. What he learned about friendship, and about himself, changed him forever.

Fennell's missions forced him to stare death in the face many times. From dodging mines and bullets in Iraq's Anbar province to assisting the recovery effort after the Asian tsunami, his experiences are shocking and confronting - but also inspiring.

An unflinching look inside the action and the fear, the tragedy and the bravery of one soldier's service in the Australian SAS, Warrior Brothers is also an edge-of-your-seat adrenaline ride with a group of men you will never forget.

» Have you read this book? We'd like to know what you think about it - write a review about Warrior Brothers book by Keith Fennell and you'll earn 50c in Boomerang Bucks loyalty dollars (you must be a Boomerang Books Account Holder - it's free to sign up and there are great benefits!)

Keith Fennell was born in 1973. At the age of 21 he joined the elite Australian Special Air Service Regiment. He was deployed on many operations, including missions to Afghanistan, East Timor, the Solomon Islands and the southern Indian Ocean. Fennell also served on a medical deployment to East Africa, was a member of the boarding party in the controversial MV Tampa incident, and supported counter-terrorist operations for the 2002 Commonwealth Heads of Government Meeting (CHOGM) in Brisbane and the Sydney 2000 Olympic Games. Fennell left the SAS in late 2002 and moved to the United Arab Emirates, where he was employed as a special operations adviser. In January 2004, Fennell accepted a position in Iraq, and he spent the next 30 months running operations there, in Afghanistan and in Banda Aceh. In June 2006 Fennell returned to Australia. He published his first memoir, Warrior Brothers, in 2008 and it quickly became a bestseller. He followed up with another bestseller, Warrior Training, in 2009. Fennell is married and lives with his wife and three children on the South Coast of New South Wales.