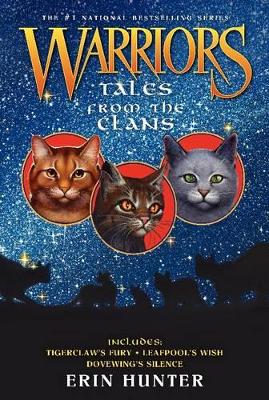 Warriors: Tales from the Clans

Description - Warriors: Tales from the Clans by Erin Hunter

Book Reviews - Warriors: Tales from the Clans by Erin Hunter

» Have you read this book? We'd like to know what you think about it - write a review about Warriors: Tales from the Clans book by Erin Hunter and you'll earn 50c in Boomerang Bucks loyalty dollars (you must be a Boomerang Books Account Holder - it's free to sign up and there are great benefits!)

Erin Hunter is inspired by a love of animals and a fascination with the ferocity of the natural world. As well as having great respect for nature in all its forms, Erin enjoys creating rich, mythical explanations for animal behavior. She is the author of the Warriors, Seekers, Survivors, and Bravelands series. She lives in the UK. Visit her online at www.warriorcats.com. Wayne McLoughlin studied art at San Diego State University and has worked as a writer and illustrator for such magazines as Esquire and National Lampoon. His books for children include Fireflies, by Alice Hoffman, Here is the Wetland, by Madeleine Dunphy (both Hyperion), and Loch, by Paul Zindel. He lives with his wife and daughter in Bellows Falls, Vermont.

A Preview for this title is currently not available.
More Books By Erin Hunter
View All