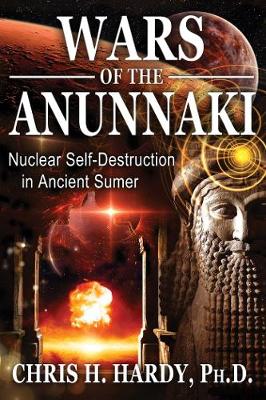 Wars of the Anunnaki

Description - Wars of the Anunnaki by Chris H. Hardy

Examines the Anunnaki gods' evolving relationships with humanity, their power struggles, and the details of their nuclear war on Earth

* Analyzes the crisis and rationale behind the Anunnaki decision to nuke 5 cities in the Jordan plain, resulting in the obliteration of Sumerian civilization

* Draws upon the work of Zecharia Sitchin, the Book of Genesis, Sumerian clay tablets, and archaeological evidence such as ancient radioactive skeletons

* Examines the Anunnakis' lack of higher consciousness, their reliance on technology, their sacred power objects and sacred geometry, and the possibility of Anunnaki bases on Mars in the distant past

The detonation of nuclear weapons in the 20th century was not the first time humanity has seen such terrible destruction. Drawing upon the work of Zecharia Sitchin, the Book of Genesis, Sumerian clay tablets, and archaeological evidence such as ancient radioactive skeletons, Chris Hardy reveals the ancient nuclear event that destroyed the Sumerian civilization and the power struggles of the "gods" that led up to it.

The author explains how the Anunnaki came to Earth from the planet Nibiru seeking gold to repair their ozone layer. Using genetic engineering, they created modern humanity to do their mining work and installed themselves as our kings and our gods. Anunnaki god Enki had a fatherly relationship with the first two humans. Then Enlil, Enki's brother, took over as Commander of Earth, instating a sole-god theocracy and a war against the clan of Enki and humanity for spoiling the Anunnaki bloodlines through interbreeding. This shift imposed a blackout not only of the very human nature of the Anunnaki "gods" but also of humanity's own ancient past on Earth.

Two of Enlil's attacks against the Enki clan and humanity are described in the stories of the Deluge and the Tower of Babel. His final attempt, after coercing the Assembly of the Gods into voting yes, was the nuclear bombing of 5 cities of the Jordan plain, including Sodom and Gomorrah, which resulted in the destruction of the Sumerian civilization and the Anunnakis' own civilization on Earth, including their space port in the Sinai. The author reveals how, after each attempt, humanity was saved by Enki, chief scientist Ninmah, and Enki's son Hermes.

The author explores how the Anunnakis' reliance on technology and their recurrent wars caused them to lose touch with cosmic consciousness. And she reveals how we will be doomed to repeat this dynamic until humanity awakens to our true origins.


Book Reviews - Wars of the Anunnaki by Chris H. Hardy

» Have you read this book? We'd like to know what you think about it - write a review about Wars of the Anunnaki book by Chris H. Hardy and you'll earn 50c in Boomerang Bucks loyalty dollars (you must be a Boomerang Books Account Holder - it's free to sign up and there are great benefits!)

Chris H. Hardy, Ph.D., holds a doctorate in ethno-psychology. A cognitive scientist and former researcher at Princeton's Psychophysical Research Laboratories, she has spent many years investigating nonlocal consciousness through systems theory, chaos theory, and her own Semantic Fields Theory. The author of many research papers and published books, including DNA of the Gods and The Sacred Network, she lives in France.

A Preview for this title is currently not available.
More Books By Chris H. Hardy
View All

Living Souls in the Spirit Dimension: The Afterlife and Transdimensional Reality
$31.99 $39.99