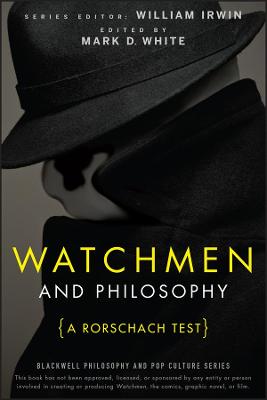 Alan Moore's Watchmen is set in 1985 and chronicles the alternative
history of the United States where the US edges dangerously closer
to nuclear war with the Soviet Union. Within this world exists a
group of crime busters, who don elaborate costumes to conceal their
identity and fight crime, and an intricate plot to kill and
discredit these "superheroes."

Alan Moore's Watchmen popularized the graphic novel format, has
been named one of Time magazine's top 100 novels, and is now being
made into a highly anticipated movie adaptation. This latest book
in the popular Blackwell Philosophy and Pop Culture series peers
into Moore's deeply philosophical work to parse and deconstruct the
ethical issues raised by Watchmen's costumed adventurers, their
actions, and their world. From nuclear destruction to utopia, from
governmental authority to human morality and social responsibility,
it answers questions fans have had for years about Watchmen's
ethical quandaries, themes, and characters.

» Have you read this book? We'd like to know what you think about it - write a review about Watchmen and Philosophy book by William Irwin and you'll earn 50c in Boomerang Bucks loyalty dollars (you must be a Boomerang Books Account Holder - it's free to sign up and there are great benefits!)

A Preview for this title is currently not available.
More Books By William Irwin
View All