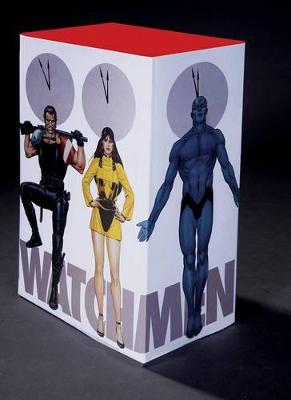 The bestselling graphic novel of all time is back in a new, 12-volume box set collector's edition at DC's Deluxe Edition trim size, just in time for the series' 30th anniversary! It all begins with the paranoid delusions of a half-insane hero called Rorschach. But is Rorschach really insane-or has he in fact uncovered a plot to murder super-heroes and, even worse, millions of innocent civilians? On the run from the law, Rorschach reunites with his former teammates in a desperate attempt to save the world and their lives, but what they uncover will shock them to their very core and change the face of the planet!

» Have you read this book? We'd like to know what you think about it - write a review about Watchmen Collectors Edition Box Set book by ALAN MOORE and you'll earn 50c in Boomerang Bucks loyalty dollars (you must be a Boomerang Books Account Holder - it's free to sign up and there are great benefits!)

Alan Moore is perhaps the most acclaimed writer in the graphic story medium, having garnered countless awards for works such as WATCHMEN, V FOR VENDETTA, From Hell, Miracleman and SWAMP THING. He is also the mastermind behind the America's Best Comics line, through which he has created (along with many talented illustrators) THE LEAGUE OF EXTRAORDINARY GENTLEMEN, PROMETHEA, TOM STRONG, TOMORROW STORIES and TOP 10. As one of the medium's most important innovators since the early 1980s, Moore has influenced an entire generation of comics creators, and his work continues to inspire an ever-growing audience. Moore resides in central England.

A Preview for this title is currently not available.
More Books By ALAN MOORE
View All