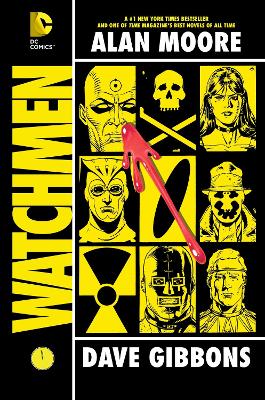 In an alternate world where the mere presence of American superheroes changed history, the US won the Vietnam War, Nixon is still president, and the cold war is in full effect. WATCHMEN begins as a murder-mystery, but soon unfolds into a planet-altering conspiracy. As the resolution comes to a head, the unlikely group of reunited heroes--Rorschach, Nite Owl, Silk Spectre, Dr. Manhattan and Ozymandias--have to test the limits of their convictions and ask themselves where the true line is between good and evil.

In the mid-eighties, Alan Moore and Dave Gibbons created WATCHMEN, changing the course of comics' history and essentially remaking how popular culture perceived the genre. Popularly cited as the point where comics came of age, WATCHMEN's sophisticated take on superheroes has been universally acclaimed for its psychological depth and realism.

» Have you read this book? We'd like to know what you think about it - write a review about Watchmen International Edition TP book by ALAN MOORE and you'll earn 50c in Boomerang Bucks loyalty dollars (you must be a Boomerang Books Account Holder - it's free to sign up and there are great benefits!)

Alan Moore is perhaps the most acclaimed writer in the graphic story medium, having garnered countless awards for works such as WATCHMEN, V FOR VENDETTA, SWAMP THING and Miracleman. He is also the mastermind behind the America's Best Comics line, through which he has created (along with many talented illustrators) THE LEAGUE OF EXTRAORDINARY GENTLEMEN, PROMETHEA, TOM STRONG, TOMORROW STORIES and TOP TEN. As one of the medium's most important innovators since the early 1980s, Moore has influenced an entire generation of comics creators, and his work continues to inspire an ever-growing audience.