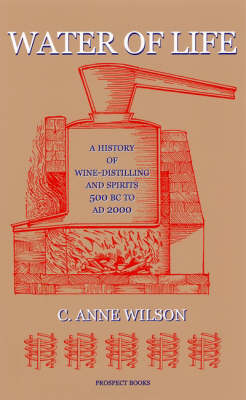 This important book looks at the entire history of distilling in the Middle East and Europe from the earliest experiments by the Pythagorean alchemists of Ptolomaic Egypt in the fourth century BC to the commerical production of spirits to drink in the British Isles to the year 2000. It is important because Ms Wilson has explored byways of early history that have been little noticed by previous scholars. She links the art of distilling to alchemical practice; to the Dionysian cults of ancient Greece and Rome; to the development of the art by the Gnostic mystic Christian sects (who greatly influenced the Coptic church in lower Egypt and Ethiopia); to the researches of the Persians and Arabs; to the preservation of the art by various heretic cults in western Europe such as the Bogomils and Cathars and, of course, the Templars; then into more mainstream development by the medieval and Renaissance alchemists; before comparative relaxation into the domestic history of distilling in England for the manufacture of strong liquor and the making of medicinal and perfumed waters by members of the landed gentry.
This is Dan Brown and the "Da Vinci Code" but written by a scholar and dealing with real-life matters not soft brain-candy. There are twelve chapters divided into three sections. The first is 'The Ancient and Early Medieval World'; 'The Eastern Mediterranean Region'; 'The Later Middle Ages'; 'Western Europe'; and 'From Early Modern Times to AD2000: The British Isles'. While treating extensively of the mystical, cultish and religious origins of distilling, as well as its links to early science, Ms Wilson looks closely at all forms of distilling in the British Isles. This work includes the manufacture of spiritous liquors such as whisky, gin, and others and the central part played in country house domestic life by cordial waters and other distillations manufactured with great skill by generations of housewives as home medicine and perfumery. The book does not treat, at any length, the history of spiritous liquors, including brandy, on mainland Europe.

» Have you read this book? We'd like to know what you think about it - write a review about Water of Life book by C. Anne Wilson and you'll earn 50c in Boomerang Bucks loyalty dollars (you must be a Boomerang Books Account Holder - it's free to sign up and there are great benefits!)

C. Anne Wilson is the author of Food and Drink in Britain (1973), the most authoratative history of the subject to date. She has also edited several volumes in the series Food in Society, produced by the Leeds group of food historians. By profession she was a librarian.

A Preview for this title is currently not available.
More Books By C. Anne Wilson
View All