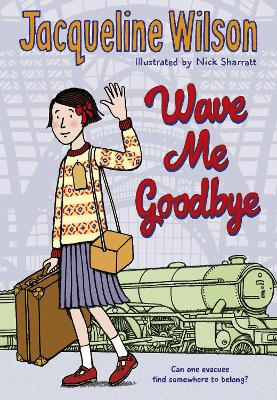 Award-winning, bestselling and beloved Jacqueline Wilson tells the fascinating, moving story of a girl sent away from home as an evacuee during the Second World War.

September, 1939. As the Second World War begins, ten-year-old Shirley is sent away on a train with her schoolmates. She doesn't know where she's going, or what's going to happen to her when she gets there. All she has been told is that she's going on 'a little holiday'.

Shirley is billeted in the country, with two boys from East End London, Kevin and Archie - and their experiences living in the strange, half-empty Red House, with the mysterious and reclusive Mrs Waverley, will change their lives for ever.

Award-winning, bestselling and beloved author Jacqueline Wilson turns to this period of history for the first time, in this beautiful, moving story of friendship and bravery against the backdrop of the worst conflict the world has ever known.

Other Editions - Wave Me Goodbye by Jacqueline Wilson » Have you read this book? We'd like to know what you think about it - write a review about Wave Me Goodbye book by Jacqueline Wilson and you'll earn 50c in Boomerang Bucks loyalty dollars (you must be a Boomerang Books Account Holder - it's free to sign up and there are great benefits!)

Jacqueline Wilson wrote her first novel when she was nine years old, and she has been writing ever since. She is now one of Britain's bestselling and most beloved children's authors. She has written over 100 books and is the creator of characters such as Tracy Beaker and Hetty Feather. More than forty million copies of her books have been sold. As well as winning many awards for her books, including the Children's Book of the Year, Jacqueline is a former Children's Laureate, and in 2008 she was appointed a Dame. Jacqueline is also a great reader, and has amassed over 20,000 books, along with her famous collection of silver rings. Find out more about Jacqueline and her books at JacquelineWilson.co.uk

A Preview for this title is currently not available.
More Books By Jacqueline Wilson
View All