The Way of Chuang Tzu

Description - The Way of Chuang Tzu by Thomas Merton

Working from existing translations, Thomas Merton composed a series of his own versions of the classic sayings of Chuang Tzu, the most spiritual of Chinese philosophers. Chuang Tzu, who wrote in the fourth and third centuries B.C., is the chief authentic historical spokesperson for Taoism and its founder Lao Tzu (a legendary character known largely through Chuang Tzu's writings). Indeed it was because of Chuang Tzu and the other Taoist sages that Indian Buddhism was transformed, in China, into the unique vehicle we now call by its Japanese name-Zen. The Chinese sage abounds in wit and paradox and shattering insights into the true ground of being. Thomas Merton, no stranger to Asian thought, brings a vivid, modern idiom to the timeless wisdom of Tao.

Other Editions - The Way of Chuang Tzu by Thomas Merton 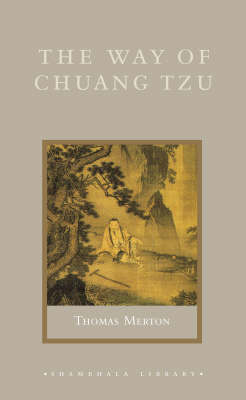 Book Reviews - The Way of Chuang Tzu by Thomas Merton

» Have you read this book? We'd like to know what you think about it - write a review about Way of Chuang Tzu book by Thomas Merton and you'll earn 50c in Boomerang Bucks loyalty dollars (you must be a Boomerang Books Account Holder - it's free to sign up and there are great benefits!)

Thomas Merton (1915-1968) entered the Cistercian Abbey of Gethsemani in Kentucky, following his conversion to Catholicism and was ordained Father M. Louis in 1949. During the 1960s, he was increasingly drawn into a dialogue between Eastern and Western religions and domestic issues of war and racism. In 1968, the Dalai Lama praised Merton for having a more profound knowledge of Buddhism than any other Christian he had known. Thomas Merton is the author of the beloved classic The Seven Storey Mountain. His Holiness The Dalai Lama is both the head of State and the spiritual leader of Tibet.

A Preview for this title is currently not available.
More Books By Thomas Merton
View All