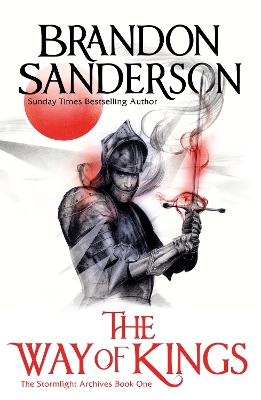 The Way of Kings Part One

The Stormlight Archive Book One

Description - The Way of Kings Part One by Brandon Sanderson

The entire world is at war with itself - and has been for centuries since the Radiants turned against mankind. Kings strive to win more Shardblades, each secretly wishing to be the one who will finally unite all of mankind under a single throne.On a world scoured down to the rock by terrifying hurricanes that blow through every few days is a young spearman, forced into the army of a Shardbearer, led to war against an enemy he doesn't understand and doesn't really want to fight.What happened deep in mankind's past? Why did the Radiants turn against mankind, and what happened to the magic they used to wield?

Book Reviews - The Way of Kings Part One by Brandon Sanderson

» Have you read this book? We'd like to know what you think about it - write a review about Way of Kings Part One book by Brandon Sanderson and you'll earn 50c in Boomerang Bucks loyalty dollars (you must be a Boomerang Books Account Holder - it's free to sign up and there are great benefits!)

Brandon Sanderson was born in Nebraska in 1975. Since then he has written, amongst others The Mistborn books and begun the internationally bestselling Stormlight Archive. He was also chosen by Robert Jordan's family to complete Jordan's Wheel of Time Sequence. He lives in Utah. Visit his website at http://www.brandonsanderson.com, follow him on Twitter at https://twitter.com/BrandSanderson and like him on Facebook at https://www.facebook.com/BrandSanderson. Read his blogs at http://mistborn.blogspot.co.uk andhttp://mistborn.livejournal.com.