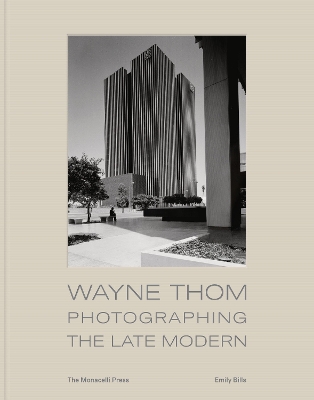 The first monograph of photographer Wayne Thom, whose documentation of Late Modern architecture constitutes an architectural/visual archive unlike any other.

A key primer to late-twentieth century Modernism, this monograph devoted to Wayne Thom chronicles his practice and the architectural and urban environment in which he worked. Wayne Thom documents key projects by the path-breaking architecture firms at the forefront of Late Modernist design including William Pereira & Associates, DMJM, Edward Durell Stone, SOM, Gio Ponti, John Portman, A. C. Martin & Associates, Arthur Erickson, I. M. Pei, and A. Quincy Jones. Other firms, less-known today but with significant portfolios from that period, are revived through the photographs and demonstrate the era's diversity.
Born in Shanghai in 1933, Thom and his family fled the Japanese invasion in 1941 to Hong Kong, where he was educated, and then to Vancouver (his brother, Bing Thom, remained there to establish his globally recognized architecture practice). It was his move to California in the mid-1960s to attend the Brooks Institute that established his technical craftsmanship in the darkroom, a hallmark of his future career. He also became adept at harnessing natural light for both interior and exterior compositions; unlike the architectural photography conventions of the day, Thom used only found lighting. He soon began working with local architects and met the figures who would become his clients and benefcators, most importantly A. Quincy Jones, a prolific architect and Dean of the School of Architecture at USC.
Thom's photography became inseparable from Late Modernism in the popular imagination, a period of architectural production that ran from the late 1960s through the 1980s. His images were broadly published in Architectural Forum, Progressive Architecture, Architectural Record, and Domus--where he photographed for Gio Ponti in his dual capacity as the magazine's publisher and as an architect. Wayne Thom- Envisioning the Late Modern is a celebration of this key architectural photographer and a unique chronicle of the works of this era.

» Have you read this book? We'd like to know what you think about it - write a review about Wayne Thom: Envisioning the Late Modern book by Emily Bills and you'll earn 50c in Boomerang Bucks loyalty dollars (you must be a Boomerang Books Account Holder - it's free to sign up and there are great benefits!)


A Preview for this title is currently not available.
More Books By Emily Bills
View All