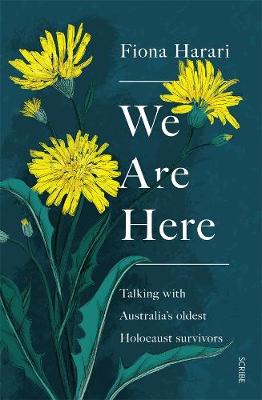 We Are Here: Talking with Australia's Oldest Holocaust Survivors

Description - We Are Here: Talking with Australia's Oldest Holocaust Survivors by Fiona Harari

These are the last adult witnesses - in their own words.

When Adolf Hitler became Chancellor of Germany in 1933, he quickly began to realise his dream of a racially superior nation free of 'inferior' groups. His goal included the eradication of European Jewry, a plan that would ultimately claim six million lives. By 1945, almost two in three European Jews were dead. So were millions of other victims of Nazism.

For those who survived, liberation came with the enormous weight of guilt and memory as they began the second part of their lives, often in faraway places such as Australia, which would become home to one of the world's highest per capita communities of Holocaust survivors.

Now the last of those adult survivors have reached an age once considered unattainable. They outlasted Nazism, and today, in their tenth and eleventh decades, have outlived most of their contemporaries. Eighteen of these Australians, originally from all over Europe, tell what it is like to have lived through those years, and long after them.

» Have you read this book? We'd like to know what you think about it - write a review about We Are Here: Talking with Australia's Oldest Holocaust Survivors book by Fiona Harari and you'll earn 50c in Boomerang Bucks loyalty dollars (you must be a Boomerang Books Account Holder - it's free to sign up and there are great benefits!)

Fiona Harari is an award-winning journalist, and the author of A Tragedy in Two Acts- Marcus Einfeld and Teresa Brennan.