We Sold Our Souls

Description - We Sold Our Souls by Grady Hendrix

In this hard-rocking, spine-tingling supernatural thriller, the washed-up guitarist of a '90s heavy metal band embarks on an epic road-trip across America and deep into the web of a sinister conspiracy.

Grady Hendrix, horror writer and author of Paperbacks from Hell and My Best Friend's Exorcism, is back with his most electrifying novel yet. In the 1990s, heavy metal band D rt W rk was poised for breakout success-but then lead singer Terry Hunt embarked on a solo career and rocketed to stardom as Koffin, leaving his fellow bandmates to rot in obscurity.

Two decades later, former guitarist Kris Pulaski works as the night manager of a Best Western-she's tired, broke, and unhappy. Everything changes when a shocking act of violence turns her life upside down, and she begins to suspect that Terry sabotaged more than just the band.

Kris hits the road, hoping to reunite with the rest of her bandmates and confront the man who ruined her life. It's a journey that will take her from the Pennsylvania rust belt to a celebrity rehab center to a music festival from hell. A furious power ballad about never giving up, even in the face of overwhelming odds, We Sold Our Souls is an epic journey into the heart of a conspiracy-crazed, pill-popping, paranoid country that seems to have lost its very soul...where only a lone girl with a guitar can save us all.

Other Editions - We Sold Our Souls by Grady Hendrix 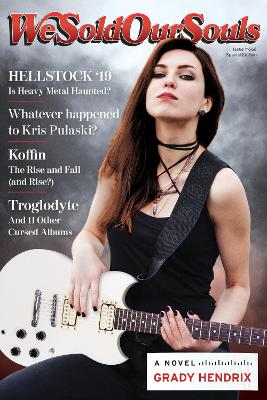 Book Reviews - We Sold Our Souls by Grady Hendrix

» Have you read this book? We'd like to know what you think about it - write a review about We Sold Our Souls book by Grady Hendrix and you'll earn 50c in Boomerang Bucks loyalty dollars (you must be a Boomerang Books Account Holder - it's free to sign up and there are great benefits!)

Grady Hendrix is a novelist and screenwriter based in New York City. His novels include Horrorstr, named one of the best books of 2014 by National Public Radio, and My Best Friend's Exorcism, for which the Wall Street Journal dubbed him "a national treasure." Paperbacks from Hell, his survey of outrageous horror novels of the 1970s and 80s, was called "pure, demented delight" by the New York Times Book Review. He's contributed to Playboy, The Village Voice, and Variety.

A Preview for this title is currently not available.
More Books By Grady Hendrix
View All