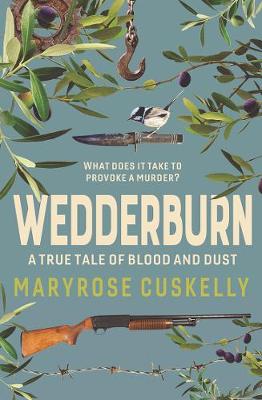 Wedderburn: A True Tale of Blood and Dust

Description - Wedderburn: A True Tale of Blood and Dust by Maryrose Cuskelly

'An ugly story told beautifully. WEDDERBURN will hold you tightly in its grip, and leave an imprint when it lets you go.' Myfanwy Jones

'In WEDDERBURN, we see the trauma caused by the blackest of hearts. A desolate yet deeply affecting tale of savage crime in rural Australia.' Mark Brandi

'Maryrose Cuskelly has the rare gift of telling a true story with the excitement and vividness of fiction; she never forsakes the facts in this chilling and hypnotic book.' William McInnes

'The slaughter was extravagant and bloody. And yet there were people in the small town of Wedderburn in Central Victoria who, while they did not exactly rejoice, quietly thought that Ian Jamieson had done them all a favour.'

One fine Wednesday evening in October 2014, 65-year-old Ian Jamieson secured a hunting knife in a sheath to his belt and climbed through the wire fence separating his property from that of his much younger neighbour Greg Holmes. Less than 30 minutes later, Holmes was dead, stabbed more than 25 times. Jamieson returned home and took two shotguns from his gun safe. He walked across the road and shot Holmes' mother, Mary Lockhart, and her husband, Peter, multiple times before calling the police.

In this compelling book, Maryrose Cuskelly gets to the core of this small Australian town and the people within it. Much like the successful podcast S-Town, things aren't always as they seem: Wedderburn begins with an outwardly simple murder but expands to probe the dark secrets that fester within small towns, asking: is murder something that lives next door to us all?

Book Reviews - Wedderburn: A True Tale of Blood and Dust by Maryrose Cuskelly

» Have you read this book? We'd like to know what you think about it - write a review about Wedderburn: A True Tale of Blood and Dust book by Maryrose Cuskelly and you'll earn 50c in Boomerang Bucks loyalty dollars (you must be a Boomerang Books Account Holder - it's free to sign up and there are great benefits!)


A Preview for this title is currently not available.
More Books By Maryrose Cuskelly
View All