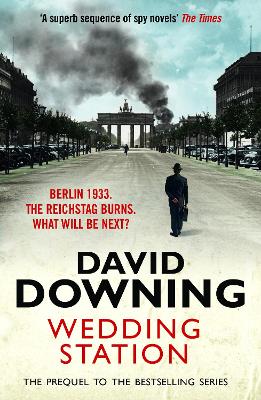 The prequel to David Downing's bestselling Station series introduces John Russell, an Englishman with a political past who must keep his head down as the Nazis solidify their power. February 27, 1933. In this stunning prequel to the John Russell espionage novels, the Reichstag parliament building in Berlin is set ablaze. It's just a month after Hitler's inauguration as Chancellor of Germany, and the Nazis use the torching to justify a campaign of terror against their political opponents. John Russell's recent separation from his wife threatens his right to reside in Germany and any meaningful relationship with his six-year-old son, Paul. He has just secured work as a crime reporter for a Berlin newspaper, and the crimes which he has to report--the gruesome murder of a rent boy, the hit-and-run death of a professional genealogist, the suspicious disappearance of a Nazi-supporting celebrity fortune-teller - are increasingly entangled in the wider nightmare engulfing Germany. Each new investigation carries the risk of Russell's falling foul of the authorities, at a time when the rule of law has completely vanished, and the Nazis are running scores of pop-up detention centres, complete with torture chambers, in every corner of Berlin. 'A superb sequence of spy novels... tight, intelligent plots full of moral ambiguities and a cast of shadowy characters for whom deception is as natural as breathing. The atmosphere of espionage is wonderfully conveyed.' -The Times AUTHOR: David Downing grew up in suburban London. He is the author of six books in the John Russell 'Station' series, set in Nazi-era and Cold War Berlin, as well as four WWI espionage novels in the Jack McColl series and the thriller The Red Eagles. He lives with his wife, an American acupuncturist, in Guildford, England.

» Have you read this book? We'd like to know what you think about it - write a review about Wedding Station book by David Downing and you'll earn 50c in Boomerang Bucks loyalty dollars (you must be a Boomerang Books Account Holder - it's free to sign up and there are great benefits!)


A Preview for this title is currently not available.
More Books By David Downing
View All