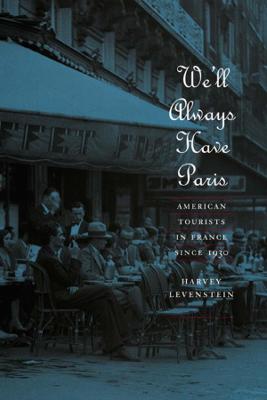 American Tourists in France Since 1930

For much of the twentieth century, Americans had a love/hate relationship with France. While many admired its beauty, culture, refinement, and famed joie de vivre, others thought of it as a dilapidated country populated by foul-smelling, mean-spirited anti-Americans driven by a keen desire to part tourists from their money. We'll Always Have Paris explores how both images came to flourish in the United States, often in the minds of the same people.

Harvey Levenstein takes us back to the 1930s, when, despite the Great Depression, France continued to be the stomping ground of the social elite of the eastern seaboard. After World War II, wealthy and famous Americans returned to the country in droves, helping to revive its old image as a wellspring of sophisticated and sybaritic pleasures. At the same time, though, thanks in large part to Communist and Gaullist campaigns against U.S. power, a growing sensitivity to French anti-Americanism began to color tourists' experiences there, strengthening the negative images of the French that were already embedded in American culture. But as the century drew on, the traditional positive images were revived, as many Americans again developed an appreciation for France's cuisine, art, and urban and rustic charms.

Levenstein, in his colorful, anecdotal style, digs into personal correspondence, journalism, and popular culture to shape a story of one nation's relationship to another, giving vivid play to Americans' changing response to such things as France's reputation for sexual freedom, haute cuisine, high fashion, and racial tolerance. He puts this tumultuous coupling of France and the United States in historical perspective, arguing that while some in Congress say we may no longer have french fries, others, like Humphrey Bogart in Casablanca, know they will always have Paris, and France, to enjoy and remember.

» Have you read this book? We'd like to know what you think about it - write a review about We'll Always Have Paris book by Harvey Levenstein and you'll earn 50c in Boomerang Bucks loyalty dollars (you must be a Boomerang Books Account Holder - it's free to sign up and there are great benefits!)

Harvey Levenstein is professor emeritus of history at McMaster University in Hamilton, Ontario, Canada. He is the author of numerous books, including a two-volume history of American food, Revolution at the Table and Paradox of Plenty, and the first of his two-volume study of American tourists and France, Seductive Journey, which is also published by the University of Chicago Press.

A Preview for this title is currently not available.
More Books By Harvey Levenstein
View All