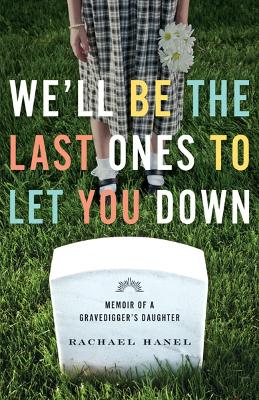 We'll be the Last Ones to Let You Down

Memoir of a Gravedigger's Daughter

Rachael Hanel's name was inscribed on a gravestone when she was eleven years old. Yet this wasn't at all unusual in her world: her father was a gravedigger in the small Minnesota town of Waseca, and death was her family's business. Her parents were forty-two years old and in good health when they erected their gravestone-Rachael's name was simply a branch on the sprawling family tree etched on the back of the stone. As she puts it: I grew up in cemeteries.And you don't grow up in cemeteries-surrounded by headstones and stories, questions, curiosity-without becoming an adept and sensitive observer of death and loss as experienced by the people in this small town. For Rachael Hanel, wandering among tombstones, reading the names, and wondering about the townsfolk and their lives, death was, in many ways, beautiful and mysterious. Death and mourning: these she understood. But when Rachael's father-Digger O'Dell-passes away suddenly when she is fifteen, she and her family are abruptly and harshly transformed from bystanders to participants. And for the first time, Rachael realizes that death and grief are very different.At times heartbreaking and at others gently humorous and uplifting, We'll Be the Last Ones to Let You Down presents the unique, moving perspective of a gravedigger's daughter and her lifelong relationship with death and grief. But it is also a masterful meditation on the living elements of our cemeteries: our neighbors, friends, and families-the very histories of our towns and cities-and how these things come together in the eyes of a young girl whose childhood is suffused with both death and the wonder of the living.

Buy We'll be the Last Ones to Let You Down by Rachael Hanel from Australia's Online Independent Bookstore, Boomerang Books.

» Have you read this book? We'd like to know what you think about it - write a review about We'll be the Last Ones to Let You Down book by Rachael Hanel and you'll earn 50c in Boomerang Bucks loyalty dollars (you must be a Boomerang Books Account Holder - it's free to sign up and there are great benefits!)

Rachael Hanel is a writer, university instructor, and former journalist. She is the author of more than twenty nonfiction books for children, and her honors include two Junior Library Guild premier selections and two Minnesota Book Award nominations. Her essays have been published in the Bellingham Review, and two of her essays were selected as cowinners of the New Delta Review creative nonfiction contest in 2011; one of those was named a notable essay in the 2012 edition of The Best American Essays.

A Preview for this title is currently not available.
More Books By Rachael Hanel
View All