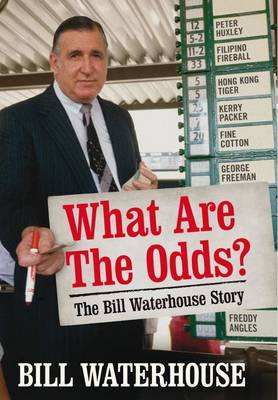 What Are The Odds? The Bill Waterhouse Story

The tell-all tale - on and off the track - of a legendary man and his extraordinary family.

The tell-all tale - on and off the track - of a legendary man and his extraordinary family.

The Waterhouse name is synonymous with Australian horse racing and bookmaking. For the first time, the family's patriarch, Bill Waterhouse, tells the story of his remarkable life 'playing the odds'.

Bill Waterhouse is a true Australian character who has spent a lifetime mixing it with the biggest names in sport, business and politics. Whilst learning the bookmaking art from his father, Bill studied law and practised as a barrister. With his brothers, he built up a property empire, including Sydney's biggest hotel, yet bookmaking remained his passion.

By the 1960s he was Australia's biggest bookie, and he remained at the top for over twenty years. Renowned for never refusing to take a gambler on, Big Bill always attracted the high-stake punters. His gambling duels are legendary- from 'Filipino Fireball' Felipe Ysmael and the 'Hong Kong Tiger' Frank Duval, to the up-and-coming Kerry Packer.

In the 1980s, with son Robbie already a leading bookmaker, the Fine Cotton affair brought ignominy to the Waterhouse name. Although cleared of any wrongdoing, Bill was warned off racetracks for fourteen years. Here he reveals how deeply the affair hurt his family and his reputation. Faced with adversity on all sides, Bill's empire came under serious threat. He fought back and eventually returned to racing at the age of 80, training his grandson Tom as the fourth generation of the Waterhouse racing dynasty.

With Tom, he again rose to be the largest on-track bookmaker in Australia. Away from racing, Bill's life has been equally eventful. He is the honorary consul-general for the Kingdom of Tonga and, having maintained an active role in helping the island nation for over 35 years, is now the longest-serving diplomat in Australia. Filled with remarkable tales of the track's greatest plunges, gamblers and stings, What Are The Odds? is an outstanding memoir of an extraordinary life.

» Have you read this book? We'd like to know what you think about it - write a review about What Are The Odds? The Bill Waterhouse Story book by Bill Waterhouse and you'll earn 50c in Boomerang Bucks loyalty dollars (you must be a Boomerang Books Account Holder - it's free to sign up and there are great benefits!)

Bill Waterhouse is the patriarch of the Waterhouse family dynasty. His interests and contacts range across the law, hotels, real estate, bookmaking and horse racing and he is the Honorary Consul General to Tonga. He is a true Australian larger-than-life character.