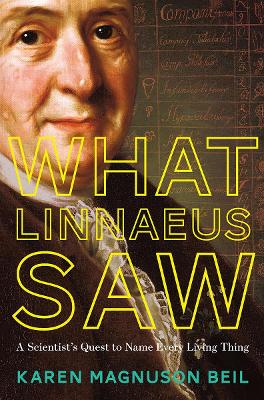 What Linnaeus Saw: A Scientist's Quest to Name Every Living Thing

Description - What Linnaeus Saw: A Scientist's Quest to Name Every Living Thing by Karen Magnuson Beil

The globetrotting naturalists of the eighteenth century were the geeks of their day: innovators and explorers who lived at the intersection of science and commerce. Foremost among them was Carl Linnaeus, a radical thinker who revolutionized biology.

In What Linnaeus Saw, Karen Magnuson Beil chronicles Linnaeus's life and career in readable, relatable prose. As a boy, Linnaeus hated school and had little interest in taking up the religious profession his family had chosen. Though he struggled through Latin and theology classes, Linnaeus was an avid student of the natural world and explored the school's gardens and woods, transfixed by the properties of different plants. At twenty-five, on a solo expedition to the Scandinavian Mountains, Linnaeus documented and described dozens of new species. As a medical student in Holland, he moved among leading scientific thinkers and had access to the best collections of plants and animals in Europe. What Linnaeus found was a world with no consistent system for describing and naming living things a situation he methodically set about changing. The Linnaean system for classifying plants and animals, developed and refined over the course of his life, is the foundation of modern scientific taxonomy, and inspired and guided generations of scientists.

What Linnaeus Saw is rich with biographical anecdotes from his attempt to identify a mysterious animal given him by the king to successfully growing a rare and exotic banana plant in Amsterdam to debunking stories of dragons and phoenixes. Thoroughly researched and generously illustrated, it offers a vivid and insightful glimpse into the life of one of modern science's founding thinkers.

» Have you read this book? We'd like to know what you think about it - write a review about What Linnaeus Saw: A Scientist's Quest to Name Every Living Thing book by Karen Magnuson Beil and you'll earn 50c in Boomerang Bucks loyalty dollars (you must be a Boomerang Books Account Holder - it's free to sign up and there are great benefits!)


A Preview for this title is currently not available.
More Books By Karen Magnuson Beil
View All