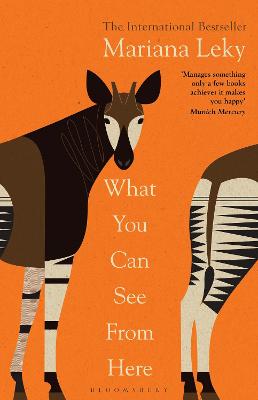 What You Can See From Here: The International Bestseller translated by Tess Lewis

Description - What You Can See From Here: The International Bestseller translated by Tess Lewis by Mariana Leky

'Manages something only a few books achieve: it makes you happy' Munich Mercury

Voted the Independent Booksellers' Favorite Novel of the year in Germany

On a beautiful spring day, a small village in Western Germany wakes up to an omen: Selma has dreamed of an okapi. Someone is about to die. But who?

As the residents of the village begin acting strangely (despite protestations that they are not superstitious), Selma's granddaughter Luise looks on as the imminent threat brings long carried secrets to the surface. And when death comes, it comes in a way none of them could have predicted...

A story about the absurdity of life and death, a bittersweet portrait of village life and the wider world that beckons beyond, What You Can See from Here is a story about the way loss and love shape not just a person, but a community.

The international bestseller which sold over 600,000 copies in Germany

Buy What You Can See From Here: The International Bestseller translated by Tess Lewis by Mariana Leky from Australia's Online Independent Bookstore, Boomerang Books.

Book Reviews - What You Can See From Here: The International Bestseller translated by Tess Lewis by Mariana Leky

» Have you read this book? We'd like to know what you think about it - write a review about What You Can See From Here: The International Bestseller translated by Tess Lewis book by Mariana Leky and you'll earn 50c in Boomerang Bucks loyalty dollars (you must be a Boomerang Books Account Holder - it's free to sign up and there are great benefits!)

Book Review: What You Can See From Here: The International Bestseller translated by Tess Lewis by Mariana Leky - Reviewed by CloggieA (13 Jul 2021)

4.5?s What You Can See From Here is a novel by German author, Mariana Leky. It is translated from German by Tess Lewis. Selma has once again dreamt of an okapi and that means someone is going to die. Selma’s ten-year-old granddaughter Luisa has permission to tell only her best friend, Martin, but word gets around anyway. While the villagers claim they don’t believe it, they are all unsettled, because that’s what has happened previously.

The idea that someone is going to die stimulates a rash of revelations; even those villagers sceptical of the impending death are motivated to confess secrets: undeclared love; the diaries of an unfaithful husband read; a burning desire to leave the village and see the world; indecision about ending a marriage; the poles of a hunting hide sawn through.

As twenty-four hours pass without a death, the village breathes a communal sigh of relief, so when death comes a few hours later, it’s a shock. But to whom it comes is truly devastating.

Twelve years on, there are changes in the village: some have acted on those revelations; others have not. Luisa, working for a grumpy book shop owner, encounters a beautiful Buddhist monk in the woods. But he’s only in the Westerwald temporarily: soon he’ll return to his monastery in Japan

Leky’s tale has a very European feel: both the style and the content of this novel are very reminiscent of Fredrik Backman’s work. She fills the novel with unusual characters, some a little quirky, some downright eccentric: an aspiring weightlifter, a cranky young recluse, a florist specialising in wreaths, and an expert in folk remedies, to name a few.

While many of the characters are named, some are most often denoted by occupation or status: the optician, the shopkeeper, the Mayor’s wife. The reader is privy to the innermost thoughts and concerns of the main players, some of which are a rich source of humour.

Leky often gives her characters wise words and insightful observations. At one point Luisa tells the reader: “Selma wanted to talk about death with us, but we wouldn’t let her, as if Death were a distant relative we were ignoring because he always behaved badly.”

If the reader is not familiar with the okapi, they should definitely ensure they see an image of this strange and remarkable animal. The latter chapters do drag a little, but this is ultimately a heart-warming, if slightly weird, read. This unbiased review is from an uncorrected proof copy provided by NetGalley and Farrar, Straus and Giroux.