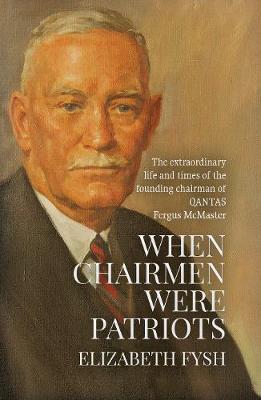 When Chairmen Were Patriots

Description - When Chairmen Were Patriots by Elizabeth Fysh

Fergus McMaster started with nothing and with his brothers built a sprawling pastoral empire in western Queensland.

Following his return from World War I, a chance meeting outside Cloncurry with Lieutenant Paul McGinness took him on a new path. With Lieutenant Hudson Fysh, the three men followed the young airmen's dream of establishing an airline. McMaster knew it was never going to be easy. Aviation was still very much in its infancy.

McMaster threw his whole weight behind the enterprise, scouring the length and breadth of the country drumming up support. As the founding chairman of QANTAS he guided the infant airline with a steady hand through its most turbulent and colourful years of establishment, internationalisation, WW2 and ultimately the government take-over.

Always intensely patriotic, he saw his role in QANTAS as a service to the nation and took little in the way of fees or salary.

It is fitting in this centenary year of QANTAS to pay tribute to his legacy.

Book Reviews - When Chairmen Were Patriots by Elizabeth Fysh

» Have you read this book? We'd like to know what you think about it - write a review about When Chairmen Were Patriots book by Elizabeth Fysh and you'll earn 50c in Boomerang Bucks loyalty dollars (you must be a Boomerang Books Account Holder - it's free to sign up and there are great benefits!)