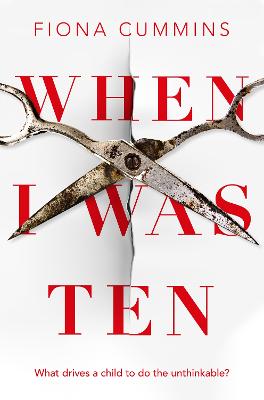 When I Was Ten

Description - When I Was Ten by Fiona Cummins

'A rich, intricately-woven novel of childhood crime and adult redemption. I finished it with my heart in my mouth. Highly recommended' - Louise Candlish

'Dark, creepy and ultimately compassionate, When I Was Ten is a chilling look at the consequences of a childhood gone wrong' - JP Delaney

'Pacey, dark and surprises to the bitter end. Loved it' - Fiona Barton

Twenty-one years ago, Dr Richard Carter and his wife Pamela were murdered in what has become the most infamous double murder of the modern age.

Ten-year-old Sara Carter - nicknamed the Angel of Death - spent eight years in a children's secure unit and is living quietly under an assumed name with a family of her own.

Now, on the anniversary of the trial, a documentary team has tracked down her older sister Shannon Carter, compelling her to break two decades of silence.

Her explosive interview sparks national headlines and journalist Brinley Booth, a childhood friend of the Carter sisters, is tasked with covering the news story.

For the first time, the three women are forced to confront what really happened on that blood-soaked night - with devastating consequences for them all.

When I Was Ten is a chilling page-turner by Fiona Cummins.

'Head and shoulders above most of the competition' - Val McDermid

'When writing from the perspective of ordinary people caught up in horrific events, Fiona Cummins is unbeatable' - Sunday Express

'A crime novel of the very first order' - David Baldacci

'Fiona Cummins has a gift for tapping a rich seam of evil that underpins the surface of the every day. Suberbly sinister' - Sunday Mirror

Buy When I Was Ten by Fiona Cummins from Australia's Online Independent Bookstore, Boomerang Books.

Other Editions - When I Was Ten by Fiona Cummins Book Reviews - When I Was Ten by Fiona Cummins

» Have you read this book? We'd like to know what you think about it - write a review about When I Was Ten book by Fiona Cummins and you'll earn 50c in Boomerang Bucks loyalty dollars (you must be a Boomerang Books Account Holder - it's free to sign up and there are great benefits!)


A Preview for this title is currently not available.
More Books By Fiona Cummins
View All