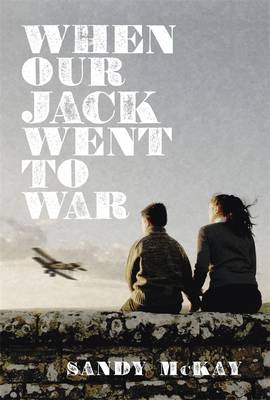 When Our Jack Went to War

Description - When Our Jack Went to War by Sandy McKay

"A powerful and moving YA story about two brothers, one of whom goes off to fight in World War One."

"A powerful and moving YA story about two brothers, one of whom goes off to fight in World War One. It s 1917 and Jack enlists. And although 13-year-old Tom is envious of his elder brother, he soon changes his mind as the reality of war becomes more apparent. We follow Jack s story through his letters home and through the eyes of his younger brother. Tom writes about life at home in New Zealand- living with Mum and their young sister, Amy, learning to hunt with his uncle, getting a puppy and learning to knit for the war effort. Jack writes of his first-hand experience in Trentham, the troop ship, Britain, France, the Battle of Messines and finally, Passchendaele. Sadly the story ends with Jack being killed at Passchendaele along with hundreds of other Kiwis. (Of the 180 soldiers in the 2nd Otago Division, 148 lost their lives in one day in New Zealand s worst ever military disaster.) When Our Jack Went to War is a fictional account of a real life tragedy, based on the author s research into the death of her own great uncle, who died in 1917. The NZ Post Award-winning Sandy Mckay ably conveys how war affects everyone it s a superb meditation on war and its deva

Book Reviews - When Our Jack Went to War by Sandy McKay

» Have you read this book? We'd like to know what you think about it - write a review about When Our Jack Went to War book by Sandy McKay and you'll earn 50c in Boomerang Bucks loyalty dollars (you must be a Boomerang Books Account Holder - it's free to sign up and there are great benefits!)

Sandy McKay is an experienced writer for children; she is the author of over 12 titles, most notably, Recycled, My Dad the All Black, Losing It and One Stroppy Jockey. She s a recipient of the Dunedin College of Education Writer in Residency, and her books have been short-listed for the NZ Post and LIANZA awards and have been listed as Storylines Notable Books. Sandy won the Junior Fiction Category of the NZ Post Children's Book Awards for Recycled. Her landmark book, Losing It, was short-listed for the Esther Glen Award and dramatised by Radio New Zealand.

A Preview for this title is currently not available.
More Books By Sandy McKay
View All