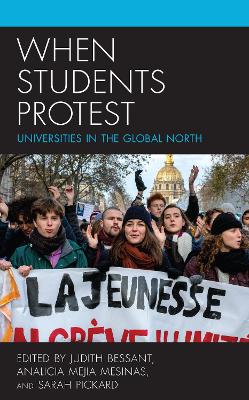 When Students Protest: Universities in the Global North

Description - When Students Protest: Universities in the Global North by Judith Bessant

Student political action has been a major and recurring feature of politics across the globe throughout the past century. Students have been involved in a full range of public issues, from anti-colonial movements, anti-war campaigns, civil rights and pro-democracy movements to campaigns against neoliberal policies, austerity, racism, misogyny and calls for climate change action. Yet their actions are frequently dismissed by political elites and others as 'adolescent mischief' or manipulation of young people by duplicitous adults. This occurs even as many working in governments, traditional media and educational organisations attempt to suppress student movements. Moreover, much of mainstream scholarly work has deemed student politics as unworthy of intellectual attention. These three edited volumes of books help set the record straight.

Written by scholars and activists from around the world, When Students Protest: Universitiesin the Global North is the third in this three-volume study that explores university student politics in the global north. Authors explore university and college student political action, especially over the past decade. It is just over fifty years since May 1968 when student protests erupted at Universite Paris Nanterre in France and then spread across the globe. Contributors to this book demonstrate that despite repeated attempts by states, power elites and institutions to suppress and even criminalise student political action, student movements have always been part of the political landscape and remain a significant and potent source of political change and renewal.

Book Reviews - When Students Protest: Universities in the Global North by Judith Bessant

» Have you read this book? We'd like to know what you think about it - write a review about When Students Protest: Universities in the Global North book by Judith Bessant and you'll earn 50c in Boomerang Bucks loyalty dollars (you must be a Boomerang Books Account Holder - it's free to sign up and there are great benefits!)