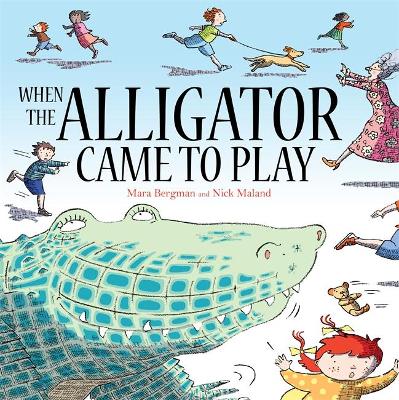 When the Alligator Came to Play

Description - When the Alligator Came to Play by Mara Bergman

When an alligator and her baby came creeping, creeping into the playground, were the people scared You bet they were! But as three brave children soon discover, the alligators aren't there to eat them after all!A joy to read aloud with outstanding illustrations, this follow-up to the award-winning Snip Snap! (now reissued as Here Comes the Alligator!) will be relished by children and adults alike. 'The original story is a sure fire hit as a read aloud and fans will definitely want to try this sequel.' The Bookbag

Book Reviews - When the Alligator Came to Play by Mara Bergman

» Have you read this book? We'd like to know what you think about it - write a review about When the Alligator Came to Play book by Mara Bergman and you'll earn 50c in Boomerang Bucks loyalty dollars (you must be a Boomerang Books Account Holder - it's free to sign up and there are great benefits!)

Mara Bergman (Author) Mara Bergman is an award-winning poet and children's writer. She grew up on Long Island, NY, and always knew she wanted to write. Her poetry has been published widely in magazines and anthologies in the UK and abroad. Her short collection, The Tailor's Three Sons and Other New York Poems, won the 2014 Mslexia Poetry Pamphlet Competition and was published in 2015 by Seren. Mara has always felt a strong link between poetry and picture books and began to write for children when her own were young. She has published more than twenty books, including Snip Snap! (reissued as Snip Snap Alligator!), illustrated by Nick Maland, which won the Stockport Children's Book Award and, in the US, a Parents' Choice Award and the Society of Illustrators' Silver medal. In 2009 she won the Booktrust Early Years Prize for Oliver Who Travelled Far and Wide, also illustrated by Nick Maland. Mara works in London as a children's fiction editor and lives in Kent. Visit her at www.marabergman.comNick Maland (Illustrator) Nick Maland graduated in English and Drama from London University in 1981. He pursued a career in the theatre, acting and directing in the London fringe, and, during this time, developed an interest in drawing, which soon took over as a full-time occupation. He has worked as an editorial illustrator for the TES, The Times, The Observer, The Guardian and The Independent amongst others. He was shortlisted for the Mother Goose Award in 1996 (for Welcome Night) and the Children's Book Award in 1998 (for Brave Whale). Further prestigious wins include the V&A illustration award in 2003 (You've Got Dragons) and the Silver Medal in Society of Illustrators Original Art 2005 Exhibition as well as the Stockport Children's Book Award (for Snip Snap). Oliver Who Travelled Far and Wide won the Booktrust Early Years Award. He has a daughter and a son and lives between London and France.

A Preview for this title is currently not available.
More Books By Mara Bergman
View All