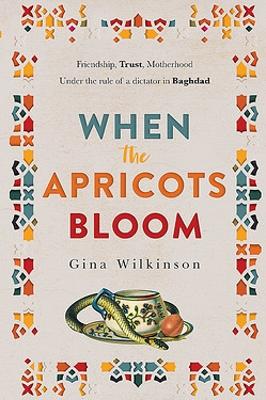 When the Apricots Bloom: an evocative, unputdownable novel of three women in Baghdad

Description - When the Apricots Bloom: an evocative, unputdownable novel of three women in Baghdad by Gina Wilkinson

What would you do if the secret police demanded you spy on a friend in order to protect your family? Three women confront the complexities of trust, friendship and motherhood under the rule of a dictator in this debut inspired by the author's own experiences in IraqAt night, in Huda's fragrant garden, a breeze sweeps in from the desert encircling Baghdad, rustling the leaves of her apricot trees and carrying warning of visitors at her gate. Huda, a secretary at the Australian embassy, lives in fear of the secret police, who have ordered her to befriend Ally, the deputy ambassador's wife. Huda's former friend Rania, an artist, enjoyed a privileged upbringing as the daughter of a sheikh. Now her family's wealth is gone, and Rania is battling to keep her child safe and a roof over their heads. As the women's lives intersect, their hidden pasts spill into the present. Facing possible betrayal at every turn, all three must trust in a fragile, newfound loyalty, even as they discover how much they are willing to sacrifice to protect their families.Transporting readers to one of the world's most legendary cities, with mouth-watering cuisine, incredible history, a surprising art scene and bustling book markets, Gina Wilkinson's suspenseful debut is told through the eyes of three very different women confronting the limits of friendship and forgiveness, and the strength of a mother's love. What readers are saying about When the Apricots Bloom:'I felt the warmth of the sun and tasted the sweetness of the lime tea. The intricately woven relationships & expert pacing had me at the edge of my seat''Mesmerizing. It was a book I couldn't put down, and it has stayed with me''I read this novel with my heart in my throat. Wilkinson's atmospheric and suspenseful novel explores complicated relationships, risks, lies, and betrayals'

Book Reviews - When the Apricots Bloom: an evocative, unputdownable novel of three women in Baghdad by Gina Wilkinson

» Have you read this book? We'd like to know what you think about it - write a review about When the Apricots Bloom: an evocative, unputdownable novel of three women in Baghdad book by Gina Wilkinson and you'll earn 50c in Boomerang Bucks loyalty dollars (you must be a Boomerang Books Account Holder - it's free to sign up and there are great benefits!)

Book Review: When the Apricots Bloom: an evocative, unputdownable novel of three women in Baghdad by Gina Wilkinson - Reviewed by CloggieA (19 Dec 2020)

5 stars “In Iraq, every friendship is a risk.”

When The Apricots Bloom is the first novel by Australian former foreign correspondent, radio journalist, documentary maker and author, Gina Wilkinson. Huda al Basri and her husband, Abdul Amir both had good jobs in Baghdad, but that was before the rise of the dictator Saddam Hussein, when Western sanctions kept Iraq virtually cut off from the rest of the world. By 2002, she considers herself lucky to have a secretarial position at the Australian Embassy, although Abdul Amir’s male pride has suffered a real blow.

Her position puts her in close contact with Ally Wilson, wife of the new Deputy Ambassador and, while the pay is good, this proximity draws the attention of the mukhabarat, Iraq’s secret police. Suddenly, she has to develop the friendship and report back every mundane detail. Refusal is impossible; the threat to her son is thinly veiled: “The mukhabarat had finished their tea. ‘We will leave you now, sister. It is late and no doubt you want to take care of your son.’ Abu Issa rose to his feet. ‘He is your most precious possession, is he not?’”

Meanwhile Ally, bored and a little lonely, embarks, somewhat naively and unbeknownst to her husband, on a personal quest to track down women knew her mother, an American nurse stationed in Baghdad in the late 1970s, without really considering the implications for those she involves.

Nor, having omitted from her entry visa form her dual citizenship (American/Australian) and her former occupation (journalist), is Ally fully aware of the potentially dire consequences should either fact become known in the current political climate of Iraq.

Rania Mansour’s gallery relies on foreign clients to survive, and diplomats form a large part of her custom. The ruling regime looks kindly upon the arts, but the president’s representative is an oily man whose eye on her fourteen-year-old daughter is unsettling; at his mention of Uday Hussein, known for his depraved appetites and cruelty, Rania can barely maintain her controlled poise.

Huda duly cultivates the friendship: the Australian girl is likeable and easy-going, but as the demands of the mukhabarat escalate, and the threats become more explicit (few parents would want their boys to join the fedayeen), Huda becomes desperate to remove her son from danger, even while Abdul Amir contends that true Iraqis do not abandon their country.

Back in 1978, the farmer’s daughter and the sheikh’s swore eternal friendship; long-held resentments and blame eroded that, but now Huda visits on the only person of influence she knows a demand for help getting a passport. That unremitting fear leads to a cascade of near-impossible requests backed up by threats. Can they save their children?

The story Wilkinson gives the reader is redolent of first-hand experience on every page. From her evocative rendition of Baghdad and Basra, the tension and fear are almost palpable, but the reader also can just about feel the heat and dust, smell the fragrances, and which book lover could read about “a river of books” and not itch to visit the Mutanabbi book market?

This is a book that explores questions of truth, loyalty, and friendship, and demonstrates how, under extreme circumstances good people can make bad choices. Wilkinson has a marvellous turn of phrase: “But lies didn’t take kindly to being forgotten, they clung to her pant leg, even as she ran for the door” and “Instead, they sucked on their nargilah pipes and fanned the coals with their bitterness” are examples. Moving, thought-provoking and clearly authentic, this is a brilliant debut novel. This unbiased review is from an uncorrected proof copy provided by NetGalley and Hachette Australia.


A Preview for this title is currently not available.
More Books By Gina Wilkinson
View All