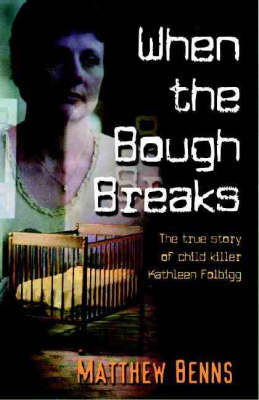 When The Bough Breaks: The True Story of Child Killer Kathleen Folbigg

Description - When The Bough Breaks: The True Story of Child Killer Kathleen Folbigg by Matthew Benns

Caleb, Patrick, Sarah and Laura Folbigg died one by one over a 10-year period in similar circumstances - suddenly, unexpectedly and while sleeping. Each was discovered by Kathleen, their mother, who raised the alarm to her husband, Craig that they were not breathing. When the Folbiggs' marriage fell apart six weeks after the death of their fourth child, Laura, Craig was devastated. It only got worse when he discovered Kathleen's diary in her bedside drawer. Horrified at his wife's ramblings about losing control with the children, her 'terrible thoughts' and her fears she was her 'father's daughter', he took the diary to the police. The diary was the crucial evidence Detective Bernie Ryan had been searching for to confirm his suspicions that the babies had been murdered. With his career and credibility on the line, he made the decision to charge Kathleen Folbigg with the murder of her four innocent babies. No one who knew Kathleen could believe she had murdered her own children. Yet few knew of her tragic past - the fact that her own father had stabbed her mother to death four decades earlier.

WHEN THE BOUGH BREAKS exposes the secret life of Australia's worst convicted female serial killer, a woman jailed for the unthinkable crime of killing her own children. It raises important issues about parents who do not feel emotionally attached to their children and about the diagnosis of Sudden Infant Death Syndrome as a cause of death.

» Have you read this book? We'd like to know what you think about it - write a review about When The Bough Breaks: The True Story of Child Killer Kathleen Folbigg book by Matthew Benns and you'll earn 50c in Boomerang Bucks loyalty dollars (you must be a Boomerang Books Account Holder - it's free to sign up and there are great benefits!)


A Preview for this title is currently not available.
More Books By Matthew Benns
View All