In October 2014, local Michigan police chief Laura Frizzo faced a perplexing missing-person case. It was not like Chris Regan, a devoted father and dependable employee, to take off without explanation. When Frizzo learned Chris was having an affair with Kelly Cochran, a married co-worker, suspicion fell on Kelly's hulking husband, Jason. Soon after that the Cochrans abruptly moved to Indiana.

Sixteen months later, Jason Cochran died from a drug overdose. Friends and family rallied around the grieving Kelly. But when the coroner ruled Jason's death a homicide, no one reacted more bizarrely than his widow. Detectives tried to put Kelly's past into focus. But the horrific truth was hidden under a near-perfect patchwork of lies. Veteran investigative journalist M. William Phelps expertly reveals Kelly Cochran's staggering saga of murder, revenge, and payback.

"Phelps is the Harlan Coben of real-life thrillers."
-Allison Brennan

"Anything by Phelps is an eye-opening experience."
-Suspense Magazine

Other Editions - Where Monsters Hide by M. William Phelps 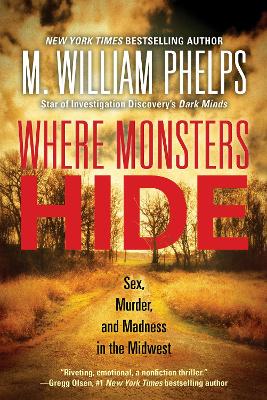 » Have you read this book? We'd like to know what you think about it - write a review about Where Monsters Hide book by M. William Phelps and you'll earn 50c in Boomerang Bucks loyalty dollars (you must be a Boomerang Books Account Holder - it's free to sign up and there are great benefits!)


A Preview for this title is currently not available.
More Books By M. William Phelps
View All